Last week in Kalyana Vaibhogam, Nithya finds out that Manga-Jai are participating and follows them there, to hurt them. Read the weekly update here 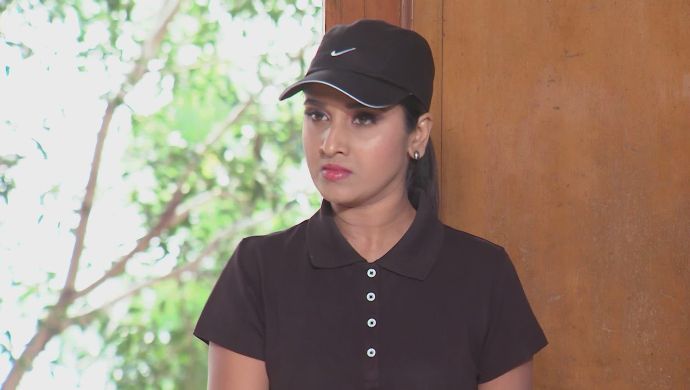 In the week before the last in Kalyana Vaibhogam, Nithya stays up all night because she does not want to be caught by Jai. She starves and forces herself against falling asleep. At one point, Nithya hallucinates that she met fell asleep, and Jai found her. Swaroopa tries to knock some sense into her, but all her efforts go in vain. Manga tries to console her sister, and even apologises for everything that Nithya has to go through. Later that day, Nithya travels to the temple with Jai, as Manga, and finds out that Jai is sure about her existence.

Chandrika calls Nithya and starts talking about their plan of action. However, Swaroopa answers the call and asks Chandrika to reveal their plan, entirely. When Chandrika realises her mistake, she blames Swaroopa for letting Nithya go out of her hands.

The next morning, Manga drags Jai to attend the interview round, for the couple’s competition. Soon after entering the room, the panel deems them to be fit for the competition, and thanks them for their effort (since Jai was also sponsoring the show).

Manga comes back and calls her mother. She informs Swaroopa that Jai and she will be leaving in a day, to participate in the competition. Swaroopa tries to talk her out of it since she was pregnant. But Manga maintains that she needs to do it, in order to distract Jai’s obsession and attention from Nithya.

That day, outside the office, Chary gives Jai a pep talk and asks him to concentrate on winning the competition. The police arrive and ‘warn’ Jai to be careful, because there are people trying to hurt him. It was Swaroopa who informed the police to warn them.

At night, Manga starts packing their bags and asks Jai if he needs anything. Jai nods positively and walks over to his closet. He opens the chest and takes out the pistol. Manga is shocked to see it, but Jai insists that she needs to be careful – because she is a soft target.

Chandrika and Prasad go to the resort along with Jai and Manga, since they had participated in the competition too. However, their intention was to be the eyes and ears for Nithya. There, they meet Nithya, who dresses up as a bearer and informs Chandrika-Prasad that she will around them, at all times.

The first competition involves husbands cooking a dish for their husbands. Jai cooks a sweet-dish but gives it to someone else because he did not know anything about cooking. Later, he puts together a delicious salad for Manga and takes pride in feeding healthy food, to his wife and for their unborn baby.