Last week in Kalyana Vaibhogam, Swaroopa goes back to the high priest and begs him to find a way to save Manga's life. Read the weekly update here 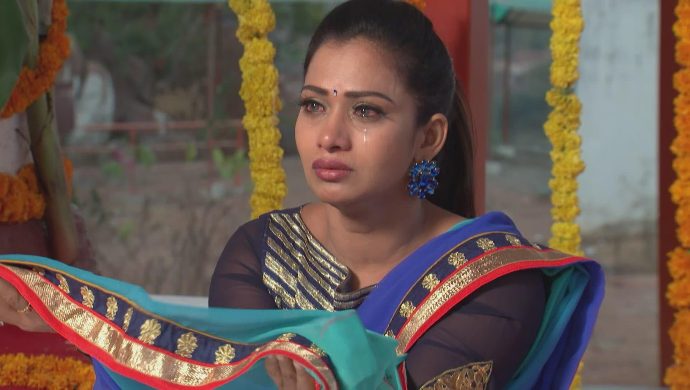 In the week before the last in Kalyana Vaibhogam, Nithya tells Chandrika and Prasad that she needs to find out how Jai was able to differentiate between the twins. The next day, in the hospital, Nithya pretends to be Manga and talks to the doctor. However, she sees Jai around and steps out. Chalamayya Shashtri meets a new high priest who had specially come to his temple. He tells the old priest that Manga only has a few more days left until her death. Chamalayya Shashtri calls Jeji and informs her about this piece of news.

Jeji and Swaroopa go and meet the new high priest in Chalamayya Shashtri’s temple. He tells the ladies that there is no cure or solution to Manga’s death by the generational curse.

Jai, who had been following Jeji, steps in and scolds the high priests for speaking nonsensical things. Jai claims that a person with a grown beard and hair cannot dictate their lives. He scolds Jeji for falling into his trap and drags her away.

In the meantime, Manga tries calling out to everyone in the house. But none of them are present at the moment. She starts walking towards the entrance when she slips on the stairs. However, Kalpana comes just in time and saves her.

Jai brings Jeji and Swaroopa back home. He starts scolding Jeji for being irresponsible and falling for a stranger’s words. When he demands an explanation, Jeji feels suffocated and faints. Swaroopa begs Jai to let her stay close to Manga, but he insults her and asks her to leave.

Manga feels terrible, remembering Jai’s hurtful words to Swaroopa. Jai tries to defend his point of view and the two have an argument. In the heat of the moment, Manga says that he wouldn’t understand her pain because he has never had a mother. However, they make up for the fight a few minutes later.

Once the clock strikes midnight, Nithya calls Manga and asks about Swaroopa’s whereabouts. This sounds alarming to Manga, who assumes that Swaroopa must have done something wrong, in her state of pain. As asked by Nithya, Manga goes out of the house to see if Swaroopa is around.

The next day, Manga tells Swaroopa about Nithya’s phone call and the electricity cut at night. Swaroopa understands that it was all planned by Nithya. She presses Nithya’s neck until she suffocates, and leaves her. Swaroopa ties Nithya’s hands and legs with a rope and locks her in the room.

That day, Swaroopa goes back and begs the high priest for a solution that would save Manga’s life. After pleading and begging, the high priest asks her to conduct the Maha Mrutyunjai Homam before sunset. Just as Swaroopa sees a beacon of hope, he tells her that the Homam must be performed by Jai.

Save The Date! Prema Entha Madhuram To Premiere On Feb 10 At 9 PM