Last week in Kalyana Vaibhogam, Shastri calls Jeji and talks about the generational curse that follows in their family. Read the weekly update here. 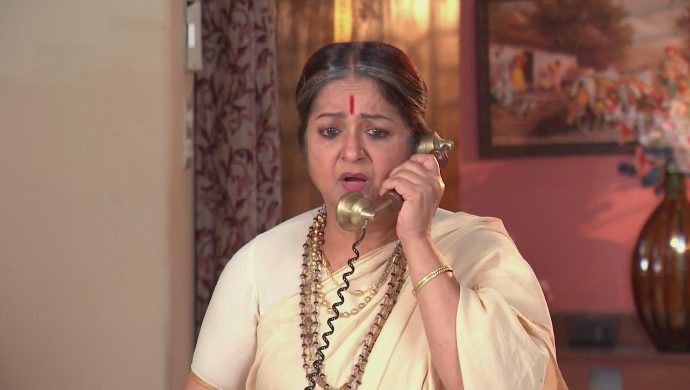 In the week before the last in Kalyana Vaibhogam, Jai tells everyone in the house that they must wear traditional Indian attire and wear authentic dishes for all four days of Sankranthi. He takes everyone to the hospital for Manga’s regular check-up. There, they find out that Jai has a secret plan in action that nobody knows about. Manga tries to understand, but Chary refuses to answer any of their questions. Later, Jai does something, after which he promises that he will find her, no matter where she is. However, he uses this to differentiate between Manga and Nithya.

Nithya dresses up as Manga and goes to the hospital, to meet the doctor and find out about Jai’s plan. However, Chandrika informs that Prasad slipped in a word about their visit to the hospital. This, in turn, assures Nithya that Jai will be in the hospital to see her.

Nithya meets the doctor and tries to find out the secret plan. When the doctor starts talking about it, Nithya sees Jai around and changes her plan. She tells the doctor that she mustn’t share any details if her husband does not want her to know.

Chandrika and Prasad return from the hospital and meet Manga in the house. They tell her that Nithya failed in finding out the secret plan. That’s when they decide to tell Chary that they know about everything. And eventually, Chary will spill the beans, without gauging anything too much.

Chary asks for leave, and Jai allows him to call it a day. Jai also thanks Chary for keeping his secret safe with him. Manga, Chandrika and Prasad hear their conversation by peeping downstairs.

A gypsie monk comes to Chalamayya Shashtri’s temple to warn them and keep the temple closed for four days. When Chalamayya Shashtri tries to understand the situation, the monk explains that terrible times are approaching the Suryadevara family.

Chalamayya Shashtri explains that Manga is a pure soul and she shouldn’t be sacrificed for their generational curse. The monk explains that her relationship with Jai is enough for her to be a reason for the curse. He says that none can stop what is destined.

Jeji gets a call from Chalamayya Shashtri, who asks her to come to the temple immediately. He tells her that Manga might die in the next four days. Then, Jeji calls Swaroopa and informs everything that was explained to her.