Kalyana Vaibhogam goes on air on June 1, post two months of lockdown. Before you start watching again, here are all the things you need to remember. 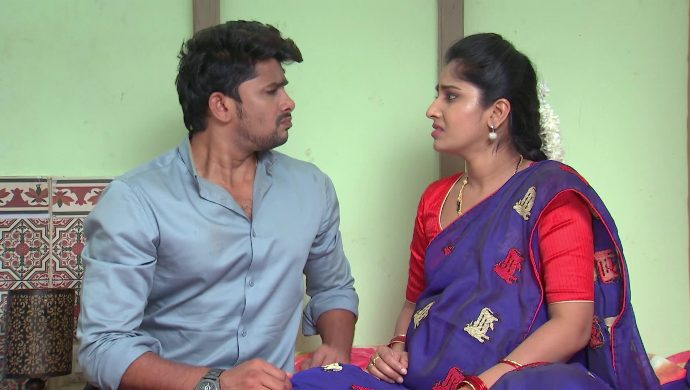 The last few months will surely be remembered as history. For the first time ever, the daily serials had to be stopped due to the coronavirus pandemic. However, after a long time, the reasons to smile to closer than ever. Starting June 1st, all Zee Telugu serials will be back on air and you can enjoy your shows once again. Kalyana Vaibhogam, too, starts soon. Before you watch what happens next, here’s a recap of what happened previously.

Swaroopa calls Jeji and tells her that Manga’s life is in danger. And the only way to push this problem far away is taking Jai’s help. Swaroopa adds that Jai must conduct the Mahamrutyunjay homam for Manga’s good health. But being the atheist that Jai is, Jeji starts panicking.

Later, Jeji and Swaroopa go to Devipuram to meet the priests who had given this advice in the first place. Jai follows them and drags Jeji away from the temple. he cities that ‘these pretentious’ people weren’t to be believed.

Swaroopa goes back to Devipuram and begs the high priest to help her save Manga. She cries her heart out and talks about how this could be one chance to redeem her previous mistakes.

Everyone goes haywire due to Jeji’s sudden panic. At the same time, Manga meets with an accident and also feels the baby kicking in her womb. When Jai feels pleased to see her in happiness, Manga requests him to take her to Devipuram.

Enroute Devipuram, Jai and Manga meet with another car accident. Swaroopa, who was following them, takes them to the hospital. While Jay lays unconscious, Manga escapes and goes to the temple and finds out that her life is only a few days longer.

Manga hides this from Jai and decides to prepare him for a life without her. So, she brings someone else’s baby home and asks Jai to take care of him. From bathing the kid to feeding him, Jai and Chary do as Manga says.

Manga also requests Nithya to marry a good man while she was still alive. Nithya pretends to be crying and agrees to do whatever she wants her to. Manga suggests Nithya marry Rana, who had started to hate her. However, nothing good comes out of this suggestion.

A couple of days before the delivery, Manga insists that she wants to deliver her baby in the Suryadevera home in Devipuram. One night, Swaroopa dreams that Manga had died in her sleep after being bitten by a snake. Soon, a huge snake also enters the house.

A couple of dangerous yet small incidents later, Jai goes to the temple and wrecks havoc. He mouths all sorts of bad things for the priest and the high priest for ruining Manga’s life and for their unasked solutions.

Later, Manga dreams that the serpent had come to take her away. She asks it to wait until she delivered the baby and after that, she walks towards death. When everyone sees Manga’s dead body next to the newborn baby, they panic. Jai sees this and breathes his last too.

When Manga wakes up from the godawful dream, she calls for Jai and hugs him. She also apologises to him. Jai asks what had gone wrong with her and why she had been talking differently for the last few days. However, Manga does not reveal anything.

Due to Nithya’s plan, Manga goes into a deep sleep and the doctor announces that she had died. Jai fails to comprehend what was happening. That’s when the high priest comes once again and asks Jai to do what he can while he still had time in hand. But as always, Jai kicks them out of the house.

Will he be able to save Manga? Watch all the episodes of Kalyana Vaibhogam episodes here.

Throwback Thursday: No 1 Kodalu Lead Madhumitha Shares A Few Glimpses From The…

Prema Entha Madhuram Review: Relive The Romance Between Arya And Anu Before…