Kalyana Vaibhogam 6 May 2019 Preview: Does Chandrika Succeed In Killing Manga?

Jai's aunt Chandrika and her husband have been trying to kill Manga for long. Will they succeed this time? Watch the next episode to find out. 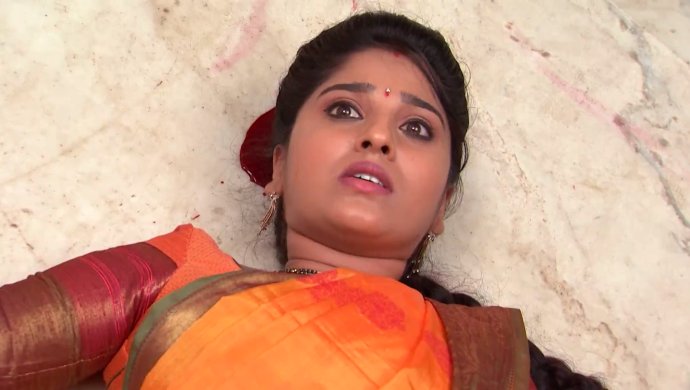 Kalyana Vaibhogam  seems to be entering an intriguing phase. In the episode aired on May 3, 2019, we saw that Jai finally accepted Manga as his wife. Earlier, Nithya had forced Manga, who was her lookalike (both characters played by Meghana Lokesh) to replace her as she didn’t want to be caught in the curse that runs in Jai’s family and die. So even though she loved Jai (played by VJ Sunny), she had made Manga take her place and get married to Jai instead.

Over the episodes, we have seen Nithya fake her death and Manga carve a place for herself in Jai’s heart after a lot of efforts. However, Jai’s aunt Chandrika (played by Usha) has been trying to marry her daughter to Jai. Her first proposal was rejected by Jai’s grandmother, Jeji (played by Indhu Anand). Ever since, Chandrika has been scheming with her husband to keep all the women in Jai’s life away from him and make way for their daughter. But all in vain. After Nithya’s death, they thought that their path was clear. And that’s when Manga entered the picture. Now that Manga and Jai are united and the family’s curse will end with Manga’s death, Chandrika has found a new motivation.

In the preview, we saw that Chandrika plans to spill oil on the marble floor in front of the stairs adjacent to Manga’s room. The plan is simple. Manga will walk up the stairs, slip and break her head. But is that how she will die, taking the generational curse away with her? Will Chandrika really succeed in killing Manga? What do you think?

In the meantime, check out Muddha Mandaram for more comedy and drama on ZEE5.