Kalyana Vaibhogam 30 May 2019 Preview: Nithya Plots Yet Another Car Accident

Her past failures have not stopped her. She's even more determined now. What do you think will happen next? 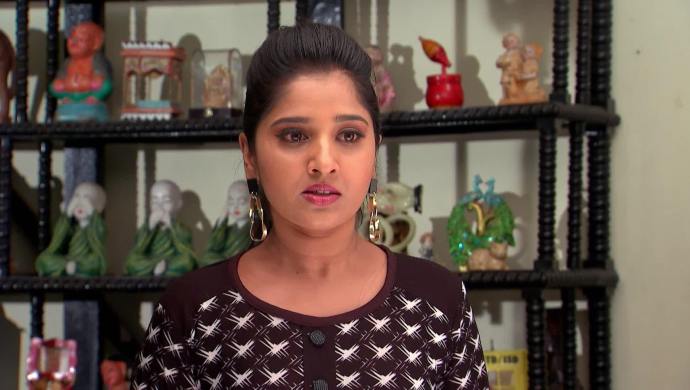 It is once again time for Nithya (played by Meghana Lokesh) to come up with yet another of her evil plans in the Telugu TV show Kalyana Vaibhogam. For a brief period, she had stepped away from Jai (played by VJ Sunny) and his wife Manga’s life. But now she is back and how! Not only does she want to kill Manga but also wants to wipe out all her achievements. However, things aren’t so easy for Nithya anymore. Once her bait, Manga has now evolved into a whole new person who doesn’t know what failure is. She moves heaven and earth to get what she wants. Even if that is something like learning how to do the catwalk for a fashion show. Check out what happens next in this Telugu serial:

In the preview for May 30, 2019, Chandrika calls Nithya to inform that Jai, Manga and Chary are already on their way to the fashion show. Unlike the past few days, Nithya behaves in a calm and composed manner. She tells Chandrika that just because they are on their way, it doesn’t mean they’ll make it. Chandrika fails to understand what Nithya is implying and questions her. Nithya explains that though they have left, anything can go wrong on the way.

Next, we see that Chary observes a car which has been chasing them. He informs Jai about it. He tries to see the car in the rear-view mirror. Later, we see a bunch of goons overtaking Jai’s car and getting down with weapons to hit him. Considering Jai’s power and smartness, we’re sure he will save the day for himself and for his wife Manga. What are the odds that Nithya wins this time, considering the past few failures? Can Jai really manage to get away from the goons and reach the venue?

This car accident isn’t the only attempt by Nithya to make sure that Manga doesn’t make it. She will definitely create more obstacles for Manga. Despite it all, will Manga still manage to win the fashion show? Watch this space for more updates.

If you like some more drama, check out Muddha Mandaram on ZEE5.