Kalyana Vaibhogam 24 May 2019 Preview: Nithya Is Stuck In Jai And Manga’s Room

Who knew Manga was as much a master planner herself? Here's how things unfold. 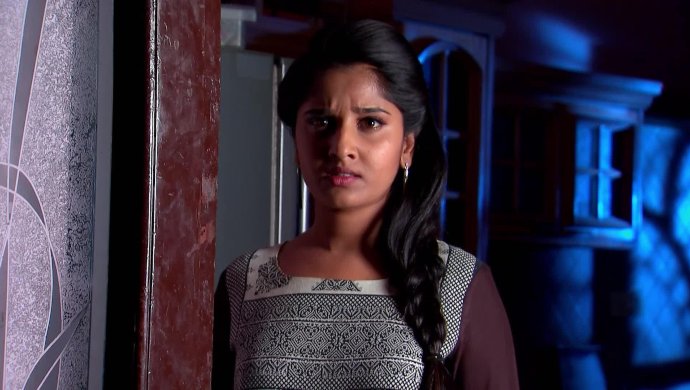 For a long time in the Telugu TV show Kalyana Vaibhogam, we believed that Nithya is the ultimate master planner. But looking at the recent developments in the Telugu serial, we are convinced that Manga (played by Meghana Lokesh) is an equally amazing master planner. Manga has been doubting that Nithya is alive, Chary has confirmed it as well after his encounter with Nithya in the park. To understand the gravity of the situation and to uncover Nithya’s dirty secret, Manga decides to stay in Nithya’s house with Jai (played by VJ Sunny) for three days. And here’s the drama that happens:

In the episode that aired on May 23, 2019, we saw that Manga and Jai, along with Chary, move into Swaroopa’s bungalow. Manga announces her wish to participate in the fashion show that Nithya has been winning for the last several years. She justifies it by claiming that everyone has been seeing Nithya’s aatma because she still has unfulfilled dreams. And maybe winning this pageant will give her lost soul some peace. Everyone agrees to her participating. Sometime later, a dress that Nithya had ordered is delivered, and Manga ruins it by chopping it randomly.

At night, Manga feeds Jai dinner and the two indulge in some PDA. That annoys Chandrika and she leaves the dinner table. Meanwhile, Nithya is furious. She is boiling with rage because she isn’t able to stop and slap Manga for being so annoying. While everyone is busy completing dinner, Nithya sneaks into the room where Manga and Jai are set to stay.

In the preview, Nithya is shown to be on the lookout for something in their room. She searches the entire room and it seems that she found what she was looking for. Is it someone’s phone? Jai and Manga complete their dinner and head to their bedroom to call it a day. But as they come closer to the room, Nithya sees them and freaks out because she will be stuck inside. What happens next? Watch this space to know.

In the meantime, check out what’s happening in Ninne Pelladatha on ZEE5.