In today's episode, Tulasi finally tells Manga the truth about her relationship with Swaroopa and Nithya. Find out more here. 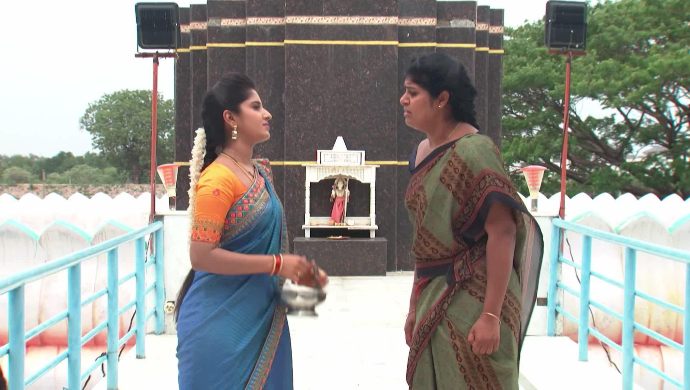 In the Telugu serial Kalyana Vaibhogam, Manga and Nithya (both roles played by Meghana Lokesh) have been fighting with each other, purposelessly, for a long time. Despite knowing the truth, Nithya has been trying to get rid of her twin sister only to satisfy her ego and win Jai Suryadevara (played by VJ Sunny) back. Manga, the wife of Jai, is done dealing with Nithya’s cruelty. Finally, she is giving her little twin sister a tough time. Right now, everyone is wondering who will win over whom. But it seems that a new and big twist is about to come.

Check out the snippet here:

In the preview for the episode airing on July 18, 2019, we see Tulasi panting when she finally sees Manga. She tells her that the time has come for her to know the truth. Manga asks if it is yet another plan by Nithya that Tulasi is forced to follow. Tulasi asks her to stop with the bickering and focus on the bigger issue. She tells Manga that Nithya is alive and is fighting to stay alive. She has lost a lot of blood, and is in dire need of it and Manga must come forward to help her. Manga thinks of it as yet another dirty trick by Nithya. She cusses Swaroopa and Nithya for doing ‘mosam, daga, kuttra‘ (injustices) and more.

Tulasi loses her calm and slaps Manga. This makes the elder twin realise the intensity of the situation and for once, she tries to understand the problem. Once again, Tulasi explains everything. She tells Manga that Swaroopa is her biological mother and that Nithya is the one who shared the same womb with her. Tulasi spells out that Manga and Nithya are twin sisters and she is the culprit who kept them away. This is the time to pay for all of her sins. Manga gets emotional and tries to think straight. What will Manga do now? Will she accept the bitter reality and embrace a new life? Or will she continue with her paga?

Ninne Pelladatha BTS: Have You Seen These Cute And Goofy Pictures Of Mansi's Haldi Yet?