It’s A Win-Win Situation for Soundarya and Bhavani, In Muddha Mandaram

In today's episode, Bhavani and Soundarya succeed in getting what they wanted on the festival of Bonalu. Read more about it here. 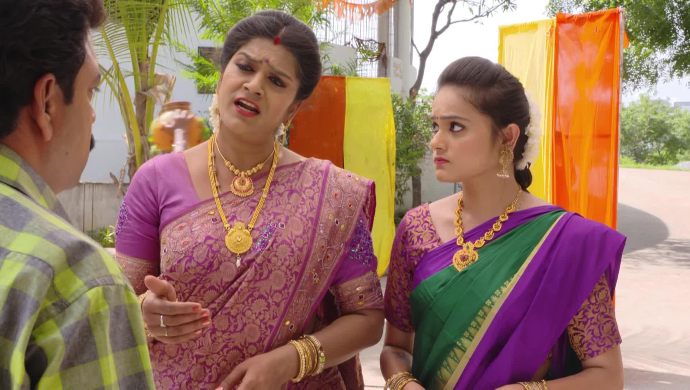 Ever since the generational leap took place in the Telugu TV show Muddha Mandaram, the main characters have been trying to connect the dots for a while now. Before anyone else, Bhavani found out about the late Parvathi’s (played by Thanuja Gowda) lookalike, Soundarya. Gani has been keeping his daughter a safe secret all along. But given Soundarya’s hyperactive behaviour and outgoing nature, doing that is next to impossible. On the other hand, Abhinandan (played by Pavan Sae), the reincarnation of the late Deva, has been roaming out on the streets fearlessly. He has no clue about his family and their rich history and yet he hasn’t been caught yet. Now… finally, the dots seem to be connecting.

Soundarya was tired of her parents’ secretive behaviour. She decided to find the answers about her relationship with the Ghattammaneni family. On the occasion of Bonalu, Soundarya decides to come face-to-face with Akhilandeswari (played by Haritha) and settle the matter. Bhavani, who knows she will have no importance if Soundarya meets Akhilandeswari, wants to keep them away at all costs. Already once, Bhavani has warned Gani that he should go away somewhere far for his own safety. So ultimately two strong and stubborn women went towards their goals with a head-on attitude. And surprisingly both won!

Soundarya tried to stay away and do as her father said. But fate wouldn’t have it so easy. And so, when Akhilandeswari was about step on burning camphor, Soundarya saved her. Eventually, Akhilandeswari found out the girl who looked like her Parvathi and the picture was a lot clearer to her. If you think it is a happy ending, sorry my friend, but this is where Bhavani comes in. Earlier during the day, Bhavani had warned Gani and after Soundarya-Akhilandeswari’s meeting, he wants to run away faster than ever. But what does the future hold for them?

Birthday Special: Did You Know These Things About Director Vamshi Paidipally?