Vamsi has no clue yet that he has rescued her once again. His mother gets concerned that she's missing from the house for long. 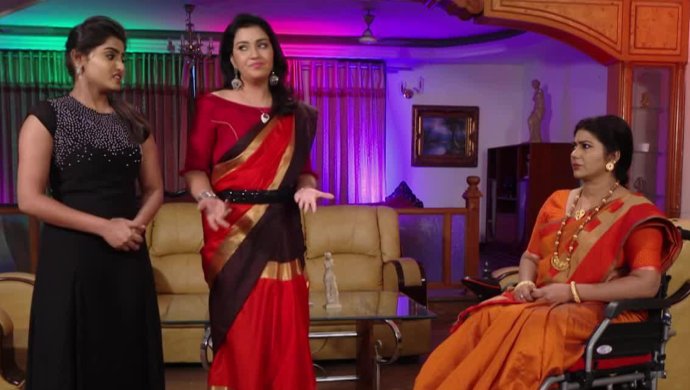 We are super excited about the twist that happened in the last episode of the Telugu TV show, Maate Mantramu, which was aired on May 22, 2019. We were all waiting for Vamsi and Vasundhara’s love story to begin. After losing hope several times, we saw a ray of light in the last episode. Jogendra was out to kidnap Vasundhara and marry her, yet again, and Vamsi turned out to rescue her once again. The only difference was this time he had no clue about Vasundhara. Here’s exactly what happens next:

If you missed out, we saw that just when Jogendra was about to drive off, after hiding the unconscious Vasundhara in the trunk of his car, Vamsi came and stood in front of him. Jogendra got out of the car to check why Vamsi was trying to stop him. That’s when he revealed that the car Jogendra was trying to drive was not his but Vamsi’s. Scared to say anything else, Jogendra left Vasundhara in Vamsi’s car. One may call it a miracle or a coincidence. But this was enough to prove that Vamsi and Vasundhara are a couple made in heaven. On his way, Vamsi found Alekhya and Anand waiting for a lift and agreed to drop them at the temple they wanted to visit. Anand asked if he was going vacation with Vasundhara, and Vamsi replied saying: “Yes. I am. She’s in the trunk of my car“. However, he was completely unaware of this fact.

Meanwhile in the Kakarla bungalow, Suchitra Devi sees that no work has been done and calls out to Vasundhara. But she gets no response. Then she sees Ayirendri and Nakshatra murmuring and questions them about Vasundhara’s absence. They tell her to stop assuming it’s their mistake every time something goes wrong. Suchitra Devi is irritated by their behaviour and warns them that if something goes wrong with Vasundhara, she will first raise a finger on the mother-daughter duo.

To know what happens after Vamsi finds Vasundhara in the trunk of his car, keep watching this space. Until then, check out Muddha Mandaram on ZEE5.

6 Quirks Of Rakul Preet's Character In The Superhit Bruce Lee: The Fighter That We Love