Vamsi and Vasundhara seem to be happy with the underlying love. But Anand and Alekhya are desperately trying to get married soon. 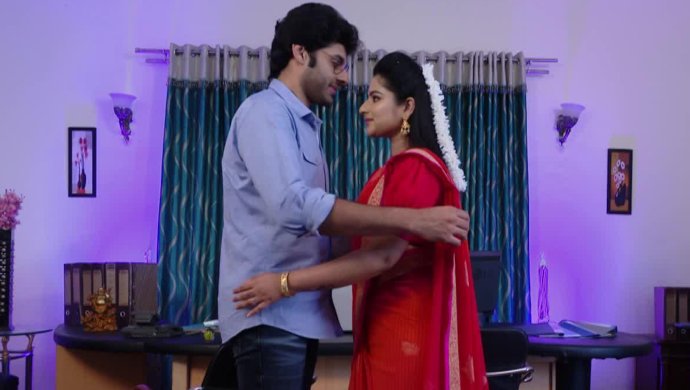 The Telugu TV show Maate Mantramu keeps our levels of curiosity constantly high. We have been eagerly waiting for the ultimate union of Vamsi and Vasundhara for a long, long time now. Yet they seem to be entirely alright with their situation. They love each other but wouldn’t accept or act upon their feelings. And then we have Vamsi’ brother and Vasundhara’s sister, Alekhya. The two, who also share the relationship of a boss and employee, have been in love for long now. Unlike their respective elder siblings, they aren’t trying to hide their feelings for each other. In fact, Anand and Alekhya and have been counting days until they can tie the knot.

In the latest episode of Maate Mantramu, telecast on May 24, 2019, we see that Anand and Alekhya successfully complete their three-day vratam. Right from going to the temple every day with naivedyam. They managed to hide their faces while seeking blessing from visitors, who turn out to be Suchitra Devi and Murthi, as a part of their vratam. Anand and Alekhya also managed to spend the night together with a holy thread tied to their wrists together in Anand’s room. Although Aparna Devi caught them once, they did not drop out on their vratam. Such is their love! Wondering when Vamsi and Vasundhara will be similar to this? Because, same!

Anand’s secretary Murthi was in the same temple as Anand and Alekhya, he even blessed them. But Murthi’s complaint was that the young couple refused to reveal their faces. And this got him guessing that he knows them personally. In the office, Anand tries to cover this up by yelling at Alekhya for no reason, just to prove that they were doing no wrong in the cabin. Murthi notices the akshanta on their foreheads and tells them about the encounter with the young couple at the temple. Anand keeps his guard high and maintains that there is no way Murthi saw them because both were in the office and were working.

Little does the naive Anand know, that almost everybody knows about his love affair with Alekhya! On the other hand, Vamsi has successfully escaped from the clutches of Nakshatra and Vasundhara (at least that’s what he think!) Now he prepares for his sole vacation in the woods, away from the family. And with that, we wait for Vamsi to discover that Vasundhara is truly in the trunk of his car.

Until next time, check out the latest episodes of Ninne Pelladatha on ZEE5.

Watch The College Drama To Relive Your Memories With ZEE5 Original Series B. Tech