In Kalyana Vaibhogam, Manga Prepares To Deal With New Troubles. Here’s How!

Now that she's the sole owner of Swaroopa's property, more problems will surround her. Some of these problems also have names, such as Nithya. 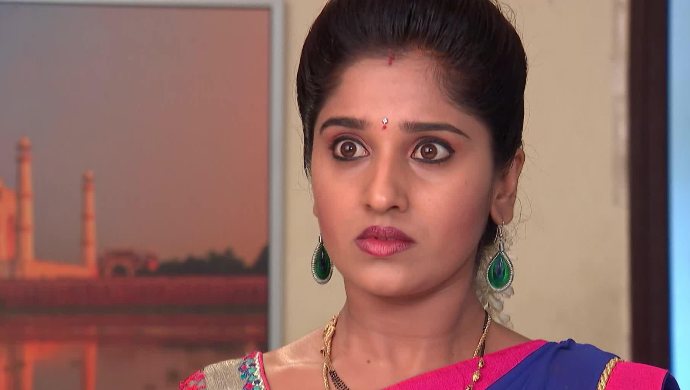 “The real game has finally begun… and Manga has taken the lead,” said Swaroopa in the latest episode of the Telugu TV show, Kalyana Vaibhogam. In case you missed it, Manga (played by Meghana Lokesh) successfully tackled all the obstacles that Nithya put her through and completed the adoption process. Now that she has become the legal heir of Swaroopa Srinivas, without further ado, she got the power of attorney to Swaroopa’s wealth. Of course, she did not go asking for it, Chandrika and Prasad tagged along to clear the path for Manga. They are now hovering around her to get hold of the money that was promised to her. Nithya has now gone silent, but her rage is not dead. Guess what’s to come at her.

Watch what happens in the latest episode here:

Before Manga could share her happiness and celebrate the news of her getting the power of attorney, Jai (played by VJ Sunny) spoke to her harshly for keeping thing hidden from him. Not only that, but Jai also taunted Chary, his loyal secretary, for helping Manga instead of standing next to him. This rude behaviour has hurt both Manga and Chary, making them feel unhappy and slowing down their process of getting back at Nithya. However, the new BFFs in town keep each other’s spirits high and motivate to reach the end goal faster.

Just when Chary and Manga were discussing their next move, Chandrika and Prasad walk in and shamelessly ask for their share of the money. Chary tackles the situation but this time the weird couple understands that they have been used and thrown by Manga. *Enmity re-enters.* Nithya’s cards are blocked and cars are taken away by Swaroopa. When Nithya demands an explanation, Swaroopa directs her to Manga. This obviously makes her blood boil but Nithya remains calm. She’s like the calm before the storm. Stay tuned to know what happens next.

Allu Sirish And Bharath Appear In A New Story As BFFs In ABCD, And It's A Joy Ride. Tag Along With Them On ZEE5