Just as Manga has started feeling happy about her life, her evil twin sister Nithya is back with her plans to kill her. Will she finally succeed? 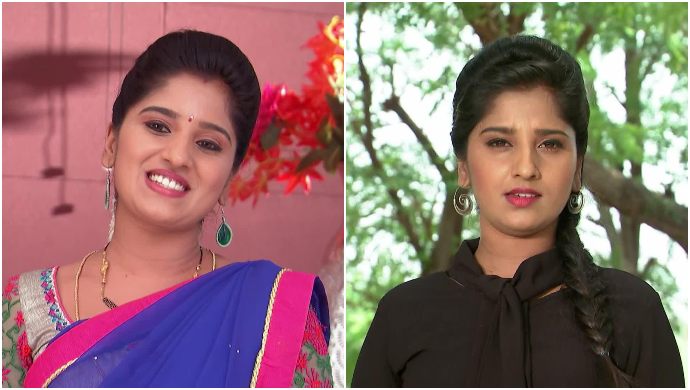 If you, like us, thought that things would get better once Manga (played by Meghana Lokesh) completed the adoption process in the Telugu serial Kalyana Vaibhogam. Then my friend, you are mistaken too. As long as Nithya breathes the same air as Manga, she will not rest. She will not allow Manga or the people around her to stay happy. We have seen the lengths that Nithya can go to, just to satisfy her obsession. The psychotic Nithya tried her best and failed to stop Manga’s adoption process as the legal heir to Swaroopa Srinivas. Now, Nithya roams on the streets, helpless and cashless. Manga, on the other hand, has taken a step back from her investigative deeds and is living a better life.

Will it remain like that for long? Check it out here:

It’s after a long, long time that Manga and Jai (played by VJ Sunny) are being playful with each other and are enjoying their moments of solitude and romance. Jai’s relationship with Chary has also gone back to normal, sarcastic and endless banter. Manga initiates their silly fights and takes control of things when they go overboard. All these days, Nithya remained silent. Now that Manga has control over Swaroopa’s wealth entirely, there is not much that Nithya can do — other than begging Manga for money. Her vehicle has been taken away and her cards are blocked by Swaroopa. Nithya, though, feels that it’s Manga’s doing.

A few days have passed, and there is no way out of misery for Nithya. What does she resort to? The same old plan — kill Manga. But this time there’s a catch. Albeit killing Manga is the end goal for Nithya, getting the power of attorney papers back is a priority. Just within minutes, Nithya warned Tulasi to get Manga out of the house and commanded Chandrika and Prasad to inform her once she steps out. The plan to is to set foot in the Suryadevara house as Manga and take back the papers. Will she succeed? Stay tuned to find out.

Lakshmi Manchu In ZEE5 Original Mrs. Subbalakshmi Will Make You Want To Pack You Bags And Escape. Watch Now.