The writer-producer of Amrutham and its much-awaited sequel talks about his process and the reason behind coming back, after a decade. Read it here. 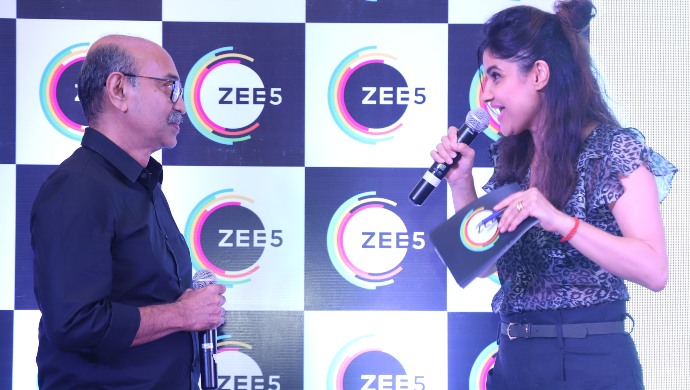 What started as a comedy, Amrutham show went on to be a phenomenon. It first aired in 2001 and changed the course of Television-consumption amongst other things. After many successful episodes and reruns, the makers of Amrutham come to ZEE5 with a revamped version, that promises to be better and bigger than ever before. Amrutham Dhvitheeyam, as it is named, sees Harsha Vardhan and Vasu Inturi reprise their roles, while LB Sriram takes charge as Anji.

Watch the trailer of the show here:

Recently, the writer and producer of the sitcom, Gunnam Gangaraju, was in Mumbai for ZEE5’s March Calendar Launch Event. During the event, he had a chance to introduce the show to a whole new audience. Most of them did not know of the phenomenon that Amrutham continues to be for Telugu natives. But going by the numbers and the stories, each one seemed to be pumped and excited to witness its second innings.

As Gunnam introduced the show, he said, “Amrutham is about a zero, you can even see the dots (on the poster). It’s about people who aren’t really clever. But people love those who are not clever. That’s why it’s successful. They feel better.” After a round full of chuckles, he continued, “It is about a couple of individuals who are not smart. Not as weird as Dumb and Dumber. But maybe watching them makes the others feel slightly better.”

When asked about his choice of getting started with something like this, he answered, “Comedy, it’s very simple. I am angry, I want to scream. I am sad, I want to cry. Instead of that, I want to make people laugh. That’s all!” He further spoke about the reasons that drove him, back in the days and said, “My team says, ‘humour is an angry art’. You are so pissed off with the world. But you cannot scream. So you scribble something really fun.”

Finally, he was asked the much-awaited question- why did it take him so long to be back with Amrutham Dhvithiyam. But the writer-producer answered it graciously. “Amrutham ranked for six years, every week non stop. It started in 2001 and ended in 2007. Even the last episode was number one. After that, it had reruns and reruns. People kept asking, once it started getting on the net, they said we want ‘two’. I said no. Because I was burnt out. I couldn’t write anymore. We wrote 310 episodes. Each episode was a story.

However, it’s not an end until it’s a happy one. That’s when he concluded, “But ZEE5 and Prasad pursued me and said ‘no man you have to do it’. Like a fool, I believed I could do it and I started it. And now, it’s going to be out on March 25th 2020.” [sic] We’re as excited as most others to see what’s in store for us. Watch the video here.

Stay tuned to this space and read all the updates about this and other popular shows. You can check all the episodes of Amrutham as you wait for the sequel, releasing on March 25, 2020.