How Will Madhu And Mrudula Deal With The Pregnancy Reports?

Now that the couple has reunited in Ninne Pelladatha, we can't wait to see how they will deal with this looming crisis. 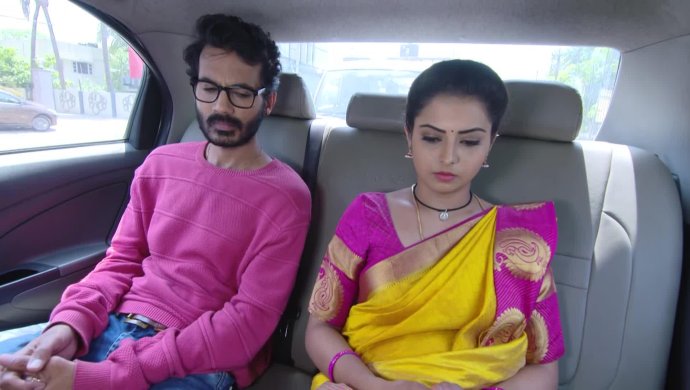 Chances are, you are completely up-to-date with all the drama that has been happening in the Telugu TV show Ninne Pelladatha. In case you have missed out on a bit here and there, let us take you through the last few weeks. After Sarayu (played by Sarayu Roy) and Mrudula’s (played by Madhubala) heated argument on the wedding day, Mrudula landed up in a hospital, unconscious. Later, Sarayu got her out of the hospital and burnt her body in a van in an effort to make the murder look like a car accident. After roaming pointlessly for a week, Madhu (played by Abhi Pratap) was finally reunited with Mrudula in a temple. Here is what happens next:

One of the biggest questions that we had was how is Mrudula is alive? The answer was given by a man who works at an ashram. He mentioned that he saw a van going up in flames and a person stuck inside. He risked his life and saved the person. In fact, Mrudula was even treated at the same ashram. But if Mrudula was alive, whose body did Madhu light up on the pyre? That’s something that we’re waiting to know. As expected, not many were happy to see Mrudula back home, alive, again. In fact, Brahmini slaps Mrudula the moment she sees her.

Previously, while Madhu and Mrudula were on their way home from the temple, there was one thought that bothered Madhu more than he could possibly express. He remembered the days when Mrudula was in the hospital and the doctor had said that Mrudula was pregnant. Now, everyone knows that Mrudula had sworn to keep a distance from Madhu until Mansi found a suitable husband for herself.

Madhu claimed that the doctor and the reports were false. But how will he confront Mrudula about the issue now? We can’t think of a possible reason. Let us know what’s on your mind.

Until then, catch up on the latest episode of Maate Mantramu on ZEE5.

Kalyana Vaibhogam 28 May 2019 Preview: Nithya Confronts Manga In Front Of Jai And Chary