Here’s What Made These Actors Sign Up For Muddha Mandaram

The Ghattammaneni family has its reasons for signing up for the popular show. But what are they? Read on to find out. 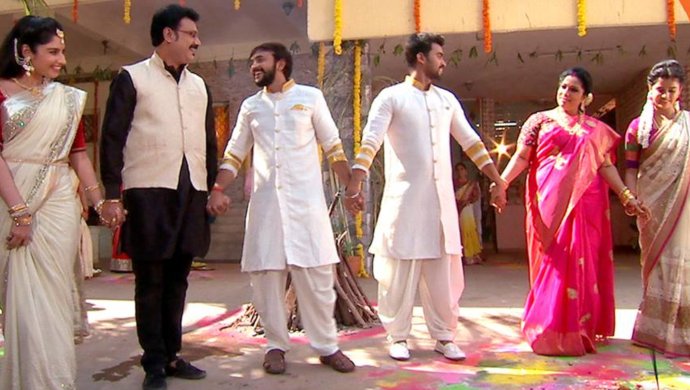 The Ghattammaneni family of popular show Muddha Mandaram has been with each other for more than four years and their bond seems to be unbreakable, both on the screen and off it. In an earlier interview, the cast members of the show revealed the reason why they decided to sign on the dotted line and become a part of Muddha Mandaram. Read their reasons below.

Veteran Telugu actor Haritha plays the role of Akhilandeswari in Muddha Mandaram. For a brief period, she was also seen as an evil Chamundeshwari. Akhila, as she is fondly called, is a perfectionist and a master at handling all situations. In an interview, she revealed that the show seemed promising right from the beginning and so she decided to stick to it.

Bhavani is Akhila’s younger sister who, for reasons unknown, stays with Akhila and her family in the Ghattammaneni house. The role is portrayed by Tollywood actor Bhavana Reddy. Interestingly, the only reason she decided to do the role was that it let her share the screen with Haritha. She revealed that after a short acting stint with Haritha in a film, she was eager on landing a full-fledged role with her and within three months, Muddha Mandaram turned her dream into reality.

Deva or Pedda Babu With Parvathi

Deva and Parvathi, played by Pavan Sae and Thanuja Gowda, had garnered instant fame and affection. Currently, they are seen in the roles of Abhinandan and Soundarya post the death of Deva and Parvathi. The on-screen couple revealed that they feel it is unjust to consider anything above Muddha Mandaram, which has given them recognition, love and work. The fact that a new show was being produced by Annapurna Studios, led by Nagarjuna, was the biggest attraction for them.

Mahi or Chinna Babu and Aishwarya

Actors Sandra Jaichandran and Krishna Reddy play the roles of Aishwarya and Mahi, also known as Chinna Babu in the Ghattammaneni family. Sandra is has been in the industry for a long time. After doing 40-odd roles in films, she was keen on finding a role that gave her the time and attention she deserved and Muddha Mandaram promised just that. Krishna, who was out of work, gave a random shot at Muddha Mandaram without expecting a callback and the rest, as they say, is history.

While shooting for the show, the actors really became a family. They love the people and the drama that comes along. If that’s what you like too, you can also check out Maate Mantramu on ZEE5.

Mancrush Monday! Nagarjuna To Nani: Treat Yourself To Your Beloved Heroes’…