With only a couple of days left for Mansi's wedding, the heat between the sisters is steadily rising. Here's what she does now. 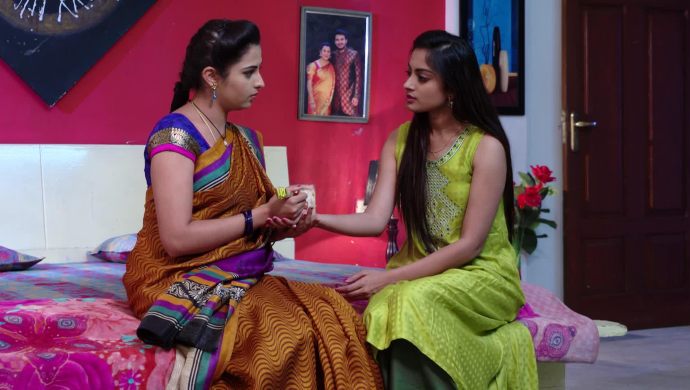 The countdown for the big day has begun in the Telugu TV show Ninne Pelladatha. Everyone in the Kamineni family is looking forward to the wedding day of Mansi (played by Sree Priya). And Mansi? She is counting down moments when she can snatch Madhu (played by Abhi Prathap) from Mrudula (played by Madhubala) and make him her own. If you still do not know where she gets this confidence from, let us tell you. It’s the one and only mastermind in the show – Brahmini Devi. Brahmini promised Mansi that she will ensure that Madhu ties the mangalsutra on Mansi on the day of her wedding, and no one else. Now, Mansi has truly opened her wings and is taking every swig at Mrudula each time she can.

Take a look at how she sasses her sister in the latest episode:

Mrudula and Mansi are both sitting in Mansi’s room. Just as Mrudula had always dreamed of, she gets to be the person who leads all the festivities related to Mansi and her wedding. In the room, Mrudula is applying mehendi on Mansi’s palms. That’s when Mansi says that Mrudula can never complain about betrayal and hatred, irrespective of whatever happens. Mrudula politely tells her that Mansi’s happiness means a lot to her and she would do whatever it takes to make her happy. Yet, if it includes giving away her wedded husband, she will not let it happen. Mrudula tells Mansi that she isn’t capable of doing injustice to Mrudula.

Mansi is taken aback by her confidence, but continues to step up her game. She challenges Mrudula by saying that if her confidence in her love and in Mansi, is indeed so high and strong, she must do everything for the wedding by herself — happily. Mrudula takes it with a hint of sweetness. She tells Mansi that it has always been her dream to do that and they hug each other. Madhu walks in and is happy to see them. After some banter, he leaves by saying that he wishes Mansi to always be happy. Once he is gone, Mansi turns to Mrudula and tells her: “I hope at least you understood, if not him, when I said my happiness will always stay with me now on.” Mrudula finds herself spellbound. What next? Stay tuned to know.