Star-studded performances by your favourite Tolly and telly stars and more. We're betting you can't get enough of this grand fiesta. 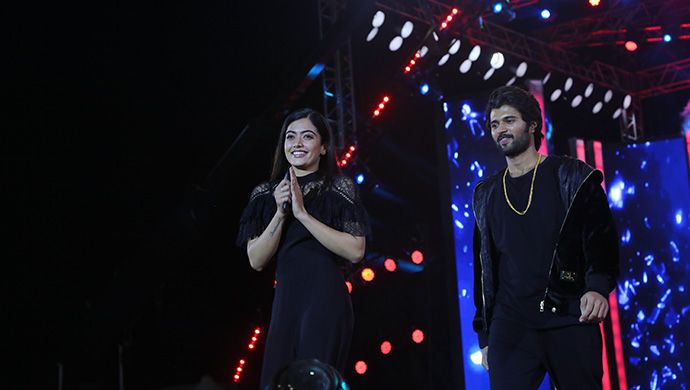 ‘Rowdy’ Vijay Deverakonda, in a yellow T-shirt with ‘Rowdy’ written on it, waving out to onlookers with his torso out of the sun-roof of a high-end SUV, a stream of 500 bikes following the star. There could not have been a grander entry to Zee Mahotsavam 2019. And on a nice and lazy Sunday, what better to do than watch the ruggedly-handsome star take the stage and perform? And not just that, Zee Mahotsavam 2019 has a string of other performances that makes this two-and-a-half hour event totally worth a watch. A star-studded event with a sprinkling of fantastic performances is what Zee Telugu’s 14th anniversary bash is all about. Watch it here:

The Geetha Govindam star stole the show at the bash at Vizianagram with his rally that lasted around 20 minutes. But that’s just the beginning of this star-studded story. The annual event saw a multitude of stars who entertained the audiences with their on-stage performances.

Vijay, who went on the stage with about 100 boys, was ably supported by star actor Rashmika Mandanna. Together, they performed on stage for their song Inkem Inkem Kaavale. Not just that, they also replicated the ‘kissing scene’ pose from their upcoming movie Dear Comrade.

The annual event, which was a collection of multiple performances had the entire Zee Telugu kutumbam in attendance. Your favourite Telugu serial stars came together and had a gala time. Popular anchor Srikumki did a dance performance. There were dance performances by the lead actors and negative characters of popular Zee Telugu shows. So, everyone from VJ Sunny, who plays Jai in the popular prime-time show Kalyana Vaibhogam to Chaithra Rai of Akka Chellellu to Ravi Krishna and Suhasini performed on stage. Also up on the stage with Haritha, or Akhilandeswari from Muddha Mandaram with her husband Jackie.

There is just so much more. Go watch it with your family for some Sunday fam jam.

We Bet You Did Not See These Plot Twists Coming In Ram Charan's Bruce Lee: The Fighter