A family without a woman? Is it possible? Check out what’s about to unfold in the new TV show which starts today. 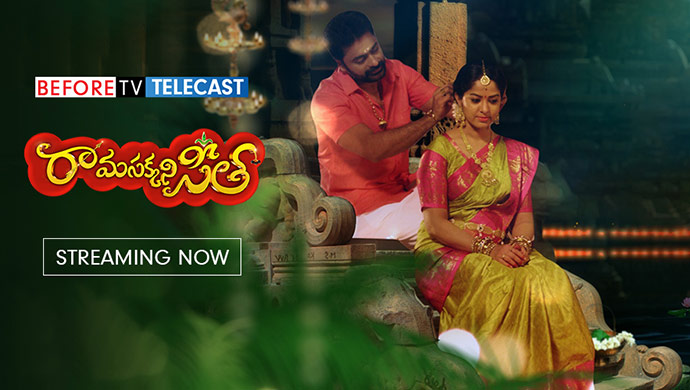 There is no dearth of entertainment for Telugu viewers on the ZEE5 Telugu platform. We all love Telugu TV shows such as Muddha Mandaram, Kalyana Vaibhogam, Attarintlo Akka Chellellu and Ninne Pelladatha among others. But if you want some more entertainment to sit and watch with your family, here’s some extra dose of good news. Starting today, July 29, 2019, a new Telugu serial called Rama Sakkani Seetha goes on air, before TV on ZEE5, at 7.30 p.m., Monday to Saturday.

The centrepoint of this show is Seetha, played by Jyothi. She goes into the family of four brothers. Interestingly, there isn’t a single woman in the family. Can you guess the reason? Well, it’s apparently because the family has a curse, which says that it will break and fall apart due to a woman. The brothers will get separated and the family will be destroyed. So, what do the four brothers do? They decide to never get married and bring a woman into the family.

But is it easy to stay away from the fairer sex? Not at all. More so because of the family business. Guess what that is? A saree shop. Yes, a business that only and only involves around women. But destiny clearly has different plans for the brothers – Ramaraju, Shankar, Naresh and Nani.

The twist comes during Seetharama Kalyanam, when the family tradition says that the eldest of the brothers, Ramaraju, has to offer a mangal sutra to the priest. But does that happen? No, the mangal sutra accidentally falls on Seetha instead. Reluctant because of the curse, Ramaraju is forced to accept Seetha as his wife.

What happens next? Is Seetha able to rid the family of the curse? Do the other brothers accept her? Does the family fall apart because of her? We are waiting to find the answers. Watch all the episodes of Rama Sakkani Seetha to find out.

For more entertainment, watch all episodes of Maate Mantramu on ZEE5.