EXCLUSIVE: This Is The Last One For Me, Says ZEE5 Original N.E.R.D. Director Deva Ganesh

The young director of ZEE5 Original N.E.R.D. has a few interesting things to say when we spoke to him. Read the interview below. 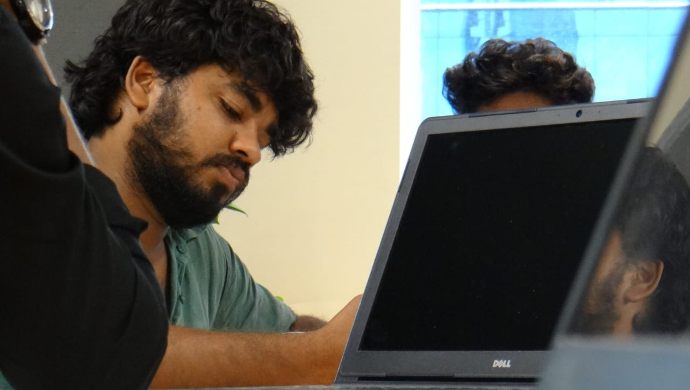 Debutante writer and director, Deva Ganesh recently delivered the ZEE5 Original Series N.E.R.D. – Neither Either Really Dead. The  series is the story of a man who comes in touch with six girls and they go missing. The mystery unfolds over seven episodes and the watch is worth it. The director, Deva Ganesh, is a 26-year-old who chanced upon N.E.R.D. when he had no intentions to do anything. We trace his unusual story over a phone call and get the insider details out. Here are edited excerpts of the chat.

A. After working on a sitcom for a channel, I wanted to quit the industry. One of the leads from the sitcom, Hasvanth, came to me and asked me to write something. I told him I was quitting the industry, but he told me, ‘you leave the industry but do something for me that would help me further’. I said okay, something good could happen with my work. So, I started working on a feature film, he brought producers on board, I narrated my story. But since I am too young in this field, they asked me to pitch for a web series before going ahead with the film. And that’s how I started working on N.E.R.D — because of Hasvanth.

Q. What happened to the script that you originally wrote?

A. It is completely done. All drafts of the scripts are ready. The producers are ready. If they want it, I am happy to share it. But I don’t want to work on it further.

A. I am not a writer. I have only been an assistant director who has worked under many directors. I do not understand the grammar of writing a script. Somehow, I managed to complete the story and script of the feature film. When the producers asked me to work on a web series, my first thought was — make it different. It couldn’t be the same old routine story. The impact it leaves on the audiences must be different. And then I drew the climax —  my hero had to be a negative character. We’re so used to seeing heroes as good guys, I wanted something different. And that’s how I started, backwards.

Q. Did you have a point of reference for the series?

A. Reference… I was inspired by Ahalya which stars Radhika Apte. I wanted to try something different like Ahalya. Even I wanted to bring in a mythological element to it, subtly in the undertones. I tried to find something but I couldn’t because the character of Hasvanth is very unusual.

Q. Can you imagine leading N.E.R.D with a girl and the men being victims?

A. It would have been more interesting. Oh god! It could have been different and there was so much more scope to portray everything. I did not think about it this way. Hasvanth asked me to do it, so I centered it around him. Had someone suggested this way, I would have definitely made it with a girl as the lead (gasps). It would have been a mad concept. I would have loved to write such a character picturised on a woman.

Q. Where do you draw the line between sensual and sleazy?

A. Actually, in regards to the series, I wrote it in a very bold way. But during the shoot, we couldn’t translate it on screen. We even thought that it was too explicit for the Telugu audience. So we followed the stereotypical ways of shooting such scenes. But we didn’t want to portray it romantically, it had to be portrayed in a lusty manner.

Do you have any takeaways from the experience of N.E.R.D.?

A. I am not doing any projects further, so I don’t want to take away anything from N.E.R.D. I feel a little low though, because had we spent more time on it, it could have been delivered in a much better way than what it is now.

Q. What was your favourite part about writing and directing N.E.R.D.?

A. I enjoyed the direction part. I wrote the script during November-December and my constant thought used to be ‘will it ever take a video format?’. Every time I wrote a good scene, as an amateur, I would be happy, but the self doubt and fear increased. I kept thinking if any OTT platform would accept it. Thinking of a national name like ZEE5 was too big. But finally, the producers and ZEE5 accepted it and we started shooting. When I saw my script translate to audio-video format, I was very happy.

Q. Do you have a favourite memory of the series?

A. Writing. Sitting alone and writing was so difficult and after every good scene, I would find myself smiling. It was all so new to me, I felt like ‘I made this’. So far, I had only directed things. During the writing process, I could understand how good it felt to create something from scratch. It has a different high.

Q. What was the one thing you expected to bring out in N.E.R.D. but couldn’t and one unexpected thing that came out of it?

A. I am not going through the response that’s coming for the series. I want to quit, if I go through them it’ll ignite something within me to restart and do better. I don’t want to go through it, so I am keeping away. I wanted the last episode to be a bang and I got that. I’m good.

A. This is the last of my works in the industry. Now, I want to travel the world. Travel across the globe with no money in my pocket and have no plans. It took me seven years to prepare my parents for this. And for all the budding or aspiring writers/directors, I have one message. This industry is a tough one. Please prepare well and do not settle for your product. Give it the time, attention and energy it deserves.