EXCLUSIVE: “I Can Get Audiences Hooked With A Crime Thriller,” Kowshik Bheemidi On Hawala

In part 1 of our exclusive interview with the director of Hawala, we talk to him about the thought behind his debut web series and more 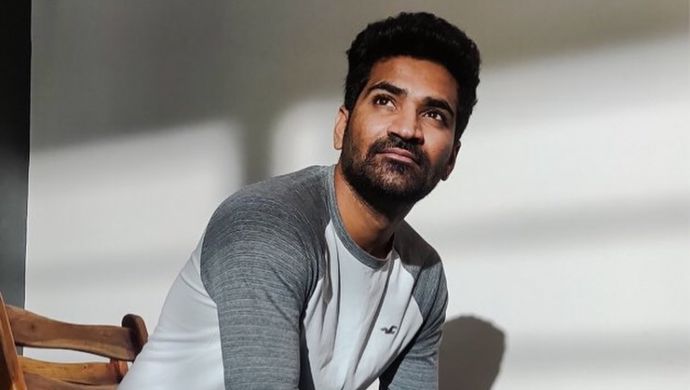 Traveller by choice and filmmaker by profession, writer-director Kowshik Bheemidi takes a plunge into the OTT world with his maiden web series, Hawala. The crime thriller is a six-episode series and has created buzz on the internet ever since it was announced. With the release of the show, this young filmmaker tries to make a dent in the OTT world and explore ahead. We caught up with him on a phone call to know more about what was his inspiration behind the series.

In part one of our exclusive chat with him, we tried to get some insider details about his journey and his work ethic. The writer-director answered everything with immense zeal and love for his project. Read the edited excerpts of his interview below.

Q. How would you describe Hawala?

A. To put it simply, it is a story about ‘need for money versus greed for money’. One couple is in the need and the other couple has the greed. Their interests clash at the point of Hawala.

Q. How did the idea originate?

A. Some time ago, I decided to do a web series. I zeroed in on a crime thriller because I know I can get my audiences hooked to it – with good cliffhangers. Being a fan of authentic filmmakers like Anurag Kashyap, I decided to keep it real with guerilla filmmaking in the old city of Hyderabad. Neither did we have the budgets nor did I want to recreate anything. So, we went ahead and kept it real.

Q. What fascinates you about crime thrillers?

Q. How did you write the six-episode series?

A. I was keeping a track of newspaper clippings and I read crime novels. I ended up collecting a few stories. So, Hawala is loosely based on many Hawala stories, cricket betting, demonetisation and the Flipkart scam. I read a lot about cricket betting, especially spot-betting, how it happens and how the signals go to from the stadium to Singapore and bounce back to the stadium in seven to eight seconds, how the bookies will cash on it etc. Even with the dialogues, I wanted to give out information instead of using it to take the story ahead.

When I was writing episode 2, I knew I wanted a chase sequence. So, I went to the location – there’s a lane next to Charminar called Chudi Baazar – and sat there for some time. I tried connecting the locations. I was looking around and found a store’s name interesting, I translated it into different languages and that’s how I found a crucial scene to write. Most of the story is written in the same manner – I sourced inspiration from real events, places and then penned it in a fictional way.

Q. Do you work your way to a scene backwards – that is reaching the endpoint before hitting the start?

A. Majorly, yes. Not always but mostly. It’s an interesting process. I speak to fellow filmmakers on a daily basis. They often talk about how they find it difficult to trim down their 120-150-minute content because they start from the start and then come to the end. That’s why I write in an episodic format. I approach the start and end of each episode and then fill in the blanks.

Q. Why are two extreme points of so much importance to you?

A. When I was asked to write a mini-series of sorts, each episode of 22 minutes, the first thing that came to my mind was a strong opening sequence. Then I’ll take a break for the title sequence. After that, I’ll get a good 15-minute bracket to tell a solid story before ending it with a cliff-hanger. The start should be as good as a good cliff hanger, to retain the audience.

Q. Does the writer in you function differently from the director in you? Or do they go hand in hand?

A. My process is a little different. I never really hired a writer, I don’t think I need one. I am a writer-director myself. Whenever I am writing, I can directly imagine my frame. So, I am a screenwriter, actually. As soon as I am done penning my script, I have the locations sorted along with the artwork needed there. Unlike others, I recce for my locations. In fact, right after completing my first draft, I visited these places and felt something. So, I came back and made a few changes accordingly. For me, writing and direction go hand-in-hand.

Q. How did you start filmmaking?

A. I started making short films, since the 3rd year of my B. Tech. I didn’t know if it would go anywhere. But I wanted to do it. So, I made five to six short films over the last few years. People complete an entire feature film. But since Hawala, I have started to take it very seriously. For me, if filmmaking is wife, travelling is a girlfriend (laughs). Every time there was a gap between shoots, I would take off. I badly need a break all the time. I’m still exploring and learning. Hopefully, my next project will be much better.

Q. Do you seek inspiration from films?

A. Yes. If you look at Raj & DK’s films, they are all inspired by newspaper cutouts. That’s how Hawala happened too. Movies like Rang De Basanti, Rockstar, Raanjhaana, Lootera, Jigar Thanda, Kai Po Che, Barfi, Arjun Reddy, Surya Son of Krishnan, Motorcycle diaries, Life of Pi, Cast Away, Zindagi Milegi Na Dobara, Neelakasham Pachakadal have influenced me one way or the other. Consciously, there was nothing but unconsciously, these films left an impact on me.

Stay tuned for part 2 of our interview with the young and enthusiastic director of Hawala. You can stream the show now, on ZEE5 and join the joyride.