EXCLUSIVE: Happy Being Reel And Real-Life Heroine: Sudha Chandran On Being An Inspiration

In part 2 of our exclusive chat with Sudha Chandran, we talk about how she has been winning in life, one obstacle after the other. Read it all here 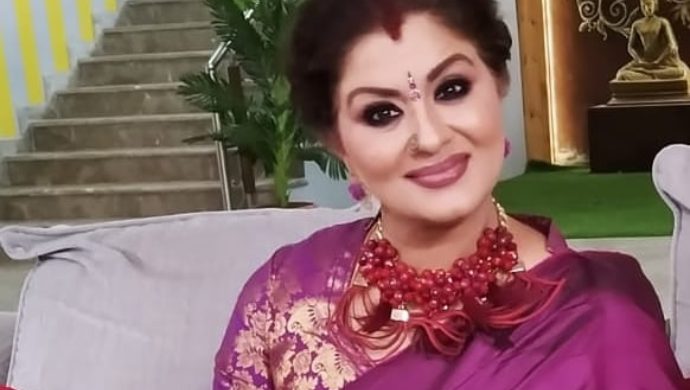 Given the comeback of an iconic film actor and a phenomenal human being, we tried to make the most of our opportunity to interview Sudha Chandran. Her latest Zee Telugu show, No. 1 Kodalu has been faring extremely well. And, the reason for it, to a great extent, is Sudha Chandran herself. Telugu audiences saw her as and in Mayuri, in 1984. And now, we see her every day as Vagdevi. If we have to pick one thing that remains the same, even 35 years apart, is the fact that she was inspiring then and she is inspiring even now.

In part one of her exclusive chat with us, she spoke about the show and the return to her debut industry. In part two, we try to get to know her as the person, her interesting and motivational ways of life. Read the edited excerpts of the interview here:

It has been about a month since the show first aired. How has the response been?

I think the TRP says it all. We started with a TRP of 4.5, then we touched 5.7. Today, it’s 6.1. So, I personally feel like I am overtly loved by the Telugu audience. We’re steadily growing, and it is a different subject. These days, people are at the stage where they want something different. They don’t want to see kitchen politics anymore. So, we have to go beyond that. Even the films that are doing well are all different themes and genres. Gone are those days when people could sell dreams, now they want to see reality. And I am so happy that Zee Telugu thought of changing with the times. It’s a very big experiment.

Vagdevi is an active voice of the importance of education, in the show. What do you think about her?

The show lay emphasis on the importance of education for girls. One of the reasons why Vagdevi is special to me is because of the fact that she is very similar to Sudha Chandran. Because Sudha Chandran walks, talks, behaves, and thinks like Vagdevi, in real life as well. Whenever I am doing a scene, I am so convinced of it because that’s what I think. And I want to see my country the way that Vagdevi wants to see.

Most people are tuning in to watch the show only for Sudha Chandran. What do you have to say about it?

It makes me feel more responsible, and that is what I was scared of. Behind one minute of screen time, there are 100 technicians. When everybody believes in you, nothing can go wrong. It is the belief that my producer, director, team, and my channel had in me… I could not have let them down. I think God has been kind. People who watched me have praised me, and given me that one precious second of their day to me – that matters a lot to me.

After earning an MA in Economics. What made you turn towards films and television?

I didn’t plan anything. It was Mayuri that got me into this field, thanks to Mr Ramoji Rao garu. They wanted to make a film about my story. When I came, I thought the industry was not the right place. Maybe because of magazines that I was reading. But later, I saw a different picture of the industry. This industry is like any other industry. I learned so much from my first film. And after that, I was at home for six years doing nothing. Everybody advised me to do IES or IFS. But in my mind, I thought God has brought me to this beautiful industry, which I had started loving. ‘Why should I deny that industry?’, that’s the only question I asked my god. He gave me an answer, and for the last 35 years, I have been here… faring beautifully, with dignity and good work.

How do you deal with the negativities around you?

I think my experiences have taught me to push the negativities thoughts aside. Turn them into positive thoughts. You will mostly see me happy. You will never see me growling or grumbling. Because there’s no point in it. Let’s make the world a happier place. You have to face everything, you cannot run away from situations or  turn something around. That’s our karma. Life is not always going to be ‘goody goody’. I think about my own life. Like Sudha, if you could come through and stand tall from that, you cannot succumb to this. Probably, there’s something brighter at the end of the tunnel. I look at the light at the end of the tunnel, not the dark. And the implicit fate in the almighty. He will give you ways to come out of the problem. How you choose to take it is your choice.

And, how do you keep yourself motivated to get out there and explore unknown territories? Because people get comfortable after a certain time and age.

I keep myself very busy in life. I think keeping yourself busy is very important. That is one. I think it’s my professionalism, my dedication, my commitment, my hard work and the blessings of my God that have helped me reach where I am. Secondly, I update myself. I feel like the moment you think you know everything, you are static, you are finished. I keep learning… from my co-actors, my directors. And, I observe people. I might not use these experiences immediately, but these examples are always in my mind.

Lastly, people of all ages look up to you as an inspiration. What’s your message to them?

I think life itself is a message. Your actions speak for you. And, I am so happy that other than being a reel-life heroine, I am also a real-life heroine, for millions of people. I believe that I have come here for a reason. When I was born, I didn’t know the purpose of my life. But probably, when I leave this world, I will be satisfied. I will have fulfilled the purpose for which I came. Today, when I meet people, I realise that Mayuri has such a huge impact on their lives. I never realised that. And, the beauty is that it didn’t stop there. People have made sure that it goes on to the next generation, and then to the next one. It is a beautiful thing that has happened.

Birthday Special: How Allu Aravind Changed The Face Of Telugu Cinema With His…

Read part one of our conversation, where we discuss her Telugu TV debut and her character Vagdevi amongst other things. Check out the latest episodes and more updates of the show here.