Exclusive: Amrutharamam Is Based On A Girl’s Perspective, Says Debutant Ram Mittakanti

In an exclusive interview, Ram Mittakanti talks about his role as the leading man in the recently-released film Amrutharamam. 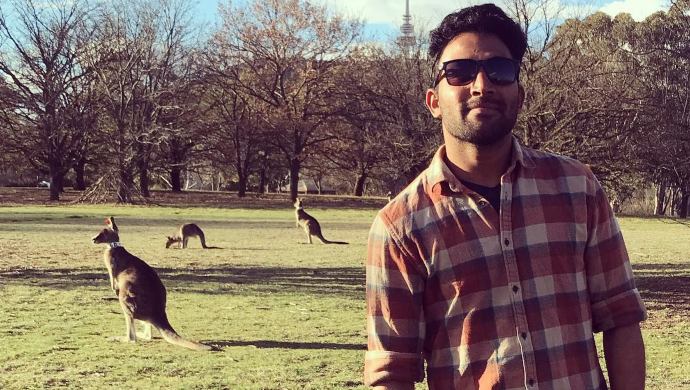 After speaking to the director and female lead of Amrutharamam, we caught up with the male lead. Ram Mittakanti is an Indian-Australian who gave up all that he earned to carve a niche for himself in the glitzy world of films. Surender Kontaddi’s debut film marks Ram’s debut as a lead hero. As excited as we were to know more about the film, Ram was gracious enough to share all that we asked about. Read the edited excerpts of the interview here.

I came to Australia to complete my studies, and then I had a job here. When I got my citizenship, I quit my job. I knew that if I work, I will not get into the movies. I cannot choose two different professions at the same time. I did not have offers, I did not not know anyone in the industry. That’s when I did a short film and after that, DSP (Devi Sri Prasad) came for a live concert. So, I found a way to roam around his crew. Not that DSP could offer me a film or direct me, but I wanted to be around them. So, that I could learn something, anything. That’s how crazy I was. It did not help me, but I don’t regret it either. A month or so later, Hawa happened to me.
Q. How was the experience through Hawa?
The director of Amrutharamam (Surender Kontaddi) was the co-director of Hawa. They were in Australia to film it and were looking for a friend’s character. My friend, who knew about my interests in acting, mentioned it and said it was happening in Canberra. He suggested that I try for it, so I sent a few of my photographs. They responded with a scene and I had to do it as part of my audition. They okayed it and called me to Canberra, I was in Sydney at the time. I wanted to learn what was happening behind the camera, as well. I am new to the industry and had no clue about what goes into making a film. I asked if I could work as an assistant director and they agreed to it. Also, my role in Hawa wasn’t that big. I had to shoot for 15 days only. Rest of the time, I kept up as an AD. That’s when I used to speak a lot with Surender.
Q. How did Amrutharamam happen to you?
I connected with  Surender on the sets of Hawa. We would discuss a lot about the scenes or anything related to films. That’s where we connected the most. After Hawa, I came down to India and stayed in touch with him. At that time, he narrated the script of Amrutharamam to me. I liked it instantly. From there, we took things ahead.
Q. Would you say you contributed a bit to the making of Amrutharamam?
Yes. We started travelling, discussing scenes and developed everything. He would even ask me for inputs, like the behaviour of people in Australia, or their antics and routines. Although it’s a love story made for Telugu audience, I did not want to miss out on the Australian flavour. We thought of adding beautiful locations as well to enhance it on the big screen. Luckily, they had about six months of visa. I went back to Australia and took help from my friends in arranging a few things for the film, like the houses where we shot and such things. They helped a lot, sometimes, they would even send over lunch for us. A lot of my friends helped the film in their own little ways.
Q. What made you invest so much in Amrutharamam?
That’s a good question. Actually, when Surender was writing the first line, I was travelling with him. He said, from ANR’s Devdas to Arjun Reddy, the approach was always from a man’s perspective. Maybe there’s an exception here and there, but I don’t think anyone tried this hard. Amrutharamam is entirely from a girl’s perspective. I knew in the beginning that the girl would have a bigger portion. But I couldn’t care less about it. The film comes first, not me. In that sense, I felt very good.
Q. How did you prepare for your role?
It isn’t a complicated one. It’s about an easy-going and practical boy, who wants what he wants. I’d discuss things with the director.  Though we know the flow of the film, I’d make it a point to ask my director about the scene before and after the one that we were about to shoot for. So, I could have a good flow. Mentally, I had to prepare for the emotional scenes by listening to some songs which help me get into the mood. Like, for a sad scene, I’d listen to songs and background scores, especially Gelupuleni Samaram from Mahanti.
Q. What do you want the audience to take away from this film?
Most guys believe that girls aren’t into the relationship, as they are. They’d probably worry that the girl will leave them for someone better. Amrutharamam will change that perception. Girls can fall in love unconditionally, and they can do anything for love. For everyone who is going to watch it, you will not regret. You will come out with a heavy heart. Most people will have tears in their eyes. It’s a very emotional love saga.
And on that note, watch the film, now streaming on ZEE5. Read more about the film here.
Coronavirus Pandemic LIVE Updates on ZEE5 News.
Don't Miss

Priyadarshi, Shashank And Team Loser Talk About Their Show At The ZEE5 May…