Exclusive: Amrutharamam Has Been Told From A Woman’s Point Of View, Says Amita Ranganath

Before the release of ZEE5's latest Telugu film, Amrutharamam, we spoke to the lead actress about her journey and the film. Read her thoughts here. 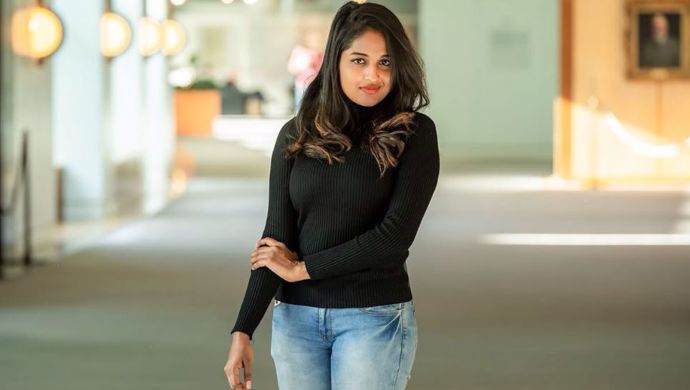 Having started her career as a voice artist for cartoon, Amita Ranganath has surely come a long way. She pursued a Diploma in Theatre Arts and quickly dived into the world of entertainment. After successfully completed five films across Tamil, Telugu and Kannada, Amrutharamam is her sixth venture. Directed by debutant Surender Kontaddi, Amrutharamam is an intense love story in which Amita plays the lead.

As we are all stuck in lockdown, there is plenty of time to engage yourself in this amazing love story. Before we could dive in, we decided to phone up the leading lady and have candid chat with her. The actor graciously spent time talking and discussing her role, her journey and the film itself. Read the edited excerpts of the interview here.

Q. How did Amrutharamam happen?
I got a call from one of the casting directors, who informed me that they were looking for a female lead, urgently, for a film which was happening in Australia. The director, hero and the whole team had already travelled to Australia. I went to the office and the director had sent the script of the climax scene to enact. I enacted the scene within 10-15 minutes and sent him the video. I had to learn the dialogues since I wasn’t in touch with the Telugu language. He was pretty impressed and they confirmed me within a week. The process started and I flew to Australia.
Q. What was the whole rush about casting the female lead?
No, no. They had already chosen another female lead. Apparently, the director had just boarded the flight when he got a call from the chosen heroine who mentioned that her visa was rejected. That’s the reason they were all there and looking for another lead. Since my sister lives in Melbourne, I have travelled to Australia several times. My brother-in-law sponsored the visa and it got confirmed within a week.
Q. When did you say yes to the film?
I did not have a lot of information about the film. I had the climax scene which was too emotional and challenging for me. You don’t know how the whole film goes or what emotion it carries throughout. So, I called the director and asked him for the gist about the scene. He explained it and then I tried acting. Later, he sent the whole script. I loved it and then, I said yes. The climax, of course, is amazing and unpredictable. The plus point of our film has to be the climax.
Q. Did you do any preparation?
Yes, of course. The character of Amrutha is very contrasting to mine. She is so obsessed and possessive about Ram, she is ready to do anything that she can even sacrifice her life. Even if she or Ram goes for a vacation, she would be busy calling and talking to him. That’s not me. I need my space and I give them their space. I kept telling the director that which girl would behave like her in our generation? I just couldn’t digest the character. Especially a scene where Ram has to kick me. He kept telling me about the character and how she is or how she behaves. So, it took some time for me to get under Amrutha’s skin. Once I got that, I could do it with ease.
Q. Did you connect to her character at any point in time?
Initially, I did not. But after playing and living the character, I can really connect to Amrutha. There was a phase where I had become Amrutha because it took me time to switch off from the character. I cannot reveal what happened during that phase. I know there are a lot of girls like Amrutha, but I am not sure if they will go to such extents, as Amrutha does. Though, I feel a lot of girls will relate to my character.
Q. The film seems extremely intense and emotional. How did you deal with that?
For me, doing emotional scenes is easy. Because I am emotional and I would listen to the songs which carry the required mood. So, when I had to do emotional songs, I would listen to Rahat Fateh Ali Khan, especially, Main Jahan Rahu, from Namaste London. And, I heard Amir Khan talk in an interview where he spoke about playing the songs which would add to the emotion we need to act in. That helped me a lot in this film.
Q. Were there any consequences that came with playing such emotionally taxing scenes?
It didn’t affect my whole life, but it did make some impact. I kind of changed, it affected my relationship as well. After returning to India, it took me some time to get out of the character. In fact, I did not realise that I had sunk so deep into the character. In Australia, I was staying all by myself and no one could point out that I wasn’t being myself. So, when I came back, my friends made me realise that I wasn’t being who I am. And then, I had to get back to my normalcy.
Q. What do you think audiences will take away from the film?
There’s a lot of emotion in the film. What I think they’ll take away is that love is everything, it can make you do crazy things. Amrutharamam is a different film. All love stories show the hero falls for the girl, or chases and proposes her. In our film, it is completely through a  woman’s point of view and that’s why every girl will relate to Amrutha.
Q. What does your lockdown schedule look like?
I had so many things on my watch-list. I am finally watching all those series and films. I am working out and experimenting, too. In terms of work, I do not practise acting. I enjoy spontaneity. But while watching content, I observe their expression, body language and all of that.
Q. What are your post-quarantine plans, professionally and personally?
I want to go to a restaurant and spend time with my friends. I am a social butterfly. I barely stay at home, so at least my parents are glad that I am home. On the professional front, I have agreed to do a few Telugu films, but there is no confirmation about it yet. And then, there are two Kannada movies where I am playing the lead, one is Varada with Vinod Prabhakar and the other is 100 under Ramesh Aravind Sir’s direction.

And on that note, watch the film, now streaming on ZEE5. Read more about the film here.

Exclusive: Amrutharamam Is A Story That Is Related To Me, Says Director Surender…

World Dance Day: 5 Tollywood Actors Who Make Our Eyes Pop Out With Their…

Throwback Thursday: Tamannaah's Picture Will Make You Want To Scout Through The Old Albums