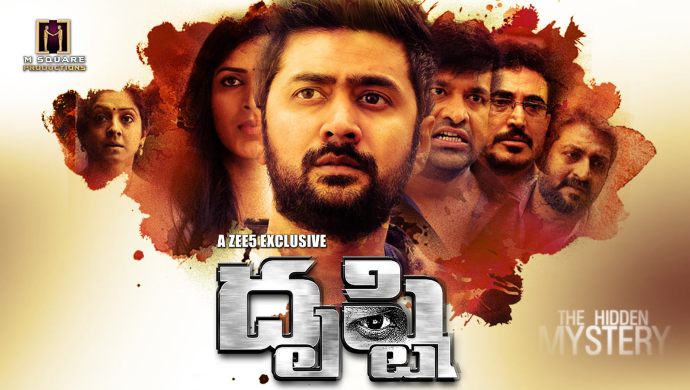 One after the other, ZEE5 Originals in Telugu have been making us sit up and take note of the content that is being churned out from the regional industries. Its latest release, Dhrusti, is different on many levels. For starters, Dhrusti boasts of an ensemble cast of well-known Tollywood actors and is a full-length murder mystery. The feature film is mainly shouldered by the talented actor-director, Rahul Ravindran. Vennela Kishore, Pavani Gangireddy, Satya Prakash, Ravi Verma, Shanmukh and Promodhini also play important and interesting roles.

Director Ram Abbaraju brings freshness to storytelling with his latest outing and his cast perfectly sings along his tunes. The film, set in Hyderabad, is the story of many murders disguised as accidents through a photographer’s lens — Mohan (Rahul). A full-time photographer, Mohan finds himself confined to the four walls of his house after a small accident. The cause behind his accident is his physiotherapist, also the only person who visits him. How, you ask? That’s what Mohan gets for making a viral video.

An aspiring entrepreneur, Jyothsana (Pavani) had to settle down as physiotherapist because her parents would not allow her to do anything on her own. In this rage, she tries to kill herself but ends up becoming a viral joke — all credit to Mohan. She finds her way to avenge this and pays the money that she has to local goons — just enough to break his legs. And hence, Mohan’s only companion, other than the camera, is his clutches. Eventually, the girl in his video, a.k.a. his new physiotherapist, becomes his friend and companion in his crazy adventures. Almost a John Watson to his Sherlock Holmes, if you will.

Mohan spends his days and nights sitting by his window with his camera. He zooms into his neighbours’ houses and tries to connect the dots in their lives. Yes, this definitely sounds creepy and disturbing. But we’re proved throughout that he is a good fella who helps people when and as possible. Another interesting trait about Mohan is his extremely curious nature. He believes there’s a Sherlock Holmes sitting inside and when you try to tell him he is wrong, Mohan says, “a genius is always misunderstood”.

Who tells him he is wrong? His best friend, Adivi Sesh (Vennela Kishore). Seshu has his own quirks. He is a short-tempered fellow and uses the fidget spinner to calm himself down. Other than slapping the protagonist with reality checks and cracking a few jokes here and there, the class actor is restricted to only a few scenes. One fine day, Mohan’s curiosity and nosy behaviour lands him next to the dead body of Shankar (Ravi). The police team arrives with the SI (Satya Prakash), who gets approximately six shots for his introduction — that’s how you know the actor has arrived, once again.

The SI has a sweet tooth and is a foodie. This is probably is a mechanism to cope with the growing stress. Entirely opposite of Mohan, he wants to come to a conclusion and close the case as soon as possible so that he can lock-up the ‘alleged’ criminal and enjoy his double cheese chicken pizza, for which he doesn’t believe in paying money. In Shankar’s murder case, thankfully, there is very little for the SI to do. Because Mohan had solved most of the mystery already. Editor S.B. Udhav sharply intercuts between the flashback and the present, keeping us on track with the story effortlessly.

Who killed Shankar? What was the purpose? What happens to the murderer? The mystery unravels in front of you over two hours. Although the story becomes predictable, we stay glued to the screen rooting for the truth. You come to question too many things, such as — why does everyone perform the darkest of deeds sitting in front of the window (kept open) instead of a safe corner. It’s too convenient but convincing acting keeps you going. You don’t have to buy everything you see here, it’s an entertaining watch. For a change, Dhrusti is a murder mystery that’s not dark and grim. It has many elements of comedy and still manages to stay true to its genre without deviating.

We totally recommend you watch this film, at least once. For more, check out the last ZEE5 original film Ala.

Birthday Special: 6 Reasons Why Sonu Sood Is The Star Hero You Didn't Recognise