Chandrika Spills The Truth About Nithya’s Death. What Happens Next?

No one believes her. So she tries to spin a new story with her husband's help. Will Jai and Manga believe her now? 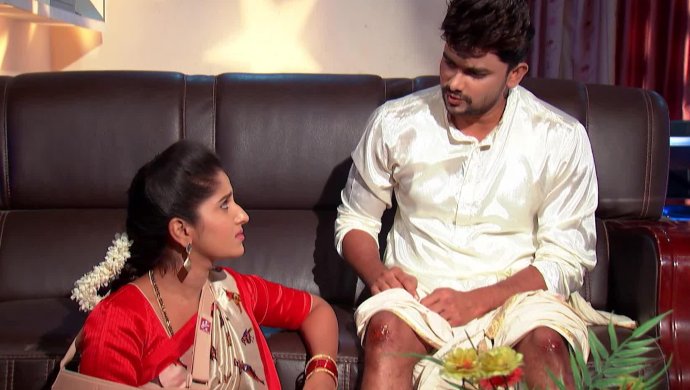 We have been yearning to see Jai and Manga, of the Telugu TV show Kalyana Vaibhogam lead a happy life that’s free from Manga’s lookalike, Nithya, and her evil plans. After much struggle, Jai and Manga found love and decided to begin a new journey together. In the recent episodes, we saw that Jai had decided to fast for Manga’s speedy recovery after a car accident that was organised by Nithya. Check out what happens later:

In the last few episodes, we saw Nithya re-enter Jai and Manga’s life only to destroy their happiness. With the Suryadevara family’s curse now upon Manga, Jai’s wedded wife, Nithya is trying her best to kill Manga and win back Jai’s love. Nithya’s first attempt was to kill Manga by paying a truck driver to dash into her car. When this failed, she tried to get close to Jai in the temple by sweet talking, while pretending to be Manga. Jai, who was climbing the temple’s stairs on his knees despite bleeding, believed that it was not Manga, only a hallucination.

In the episode dated May 16, 2019 we saw Jai telling everyone about this hallucination. While everyone is happy to see Jai so much in love with Manga, Chandrika tells him that it was no hallucination or delusion. It was Nithya instead. Jeji is in disbelief on hearing this, and loses her calm. Seeing Jeji’s state, Jai’s parents tell Chandrika and her husband to watch their words, at least, when talking about a dead person. Since nobody except Chandrika has seen Nithya alive and perfectly normal, they do not believe her.

Realising that Nithya’s fake death can put a spanner in their plan, Chandrika weaves a new story in front of everyone. She tries to tell Jai that the one who was dressed as Manga and spoke to him in the temple, must have been Nithya. And he was able to see and speak to the dead Nithya because they shared a beautiful relationship before marrying Manga.

Everyone in the house, including Jai, dismisses their nonsensical stories and calls it a day. Manga, however, isn’t convinced. Once everyone leaves, Manga asks Chandrika how many times they have seen Nithya. To this, Chandrika’s husband responds by saying, “Brahma amma! Anta brahma!” (it’s all just a delusion, dear!). Manga has now taken it upon herself to find out the truth behind these messed up stories. We wonder if she will ever come face-to-face with her arch-nemesis Nithya!

In the meantime, check out the real deal behind the big fat Indian weddings featuring Naga Shaurya in the Telugu movie Kalyana Vaibhogam on ZEE5.

Watch The ZEE5 Original B. Tech For A Binge Watch That Will Take You Down The Memory Lane

Ninne Pelladatha Brought Me Fame I Never Got All These Years, Says Sheela Singh

Did You Know Akka Chellellu Actor Chaithra Rai Is A Selfie Addict Just Like Us?