Brahmini Succeeds In Her Plan, Forces Madhu To Marry Mansi In Ninne Pelladatha

In today's episode, Brahmini finally gets what she wants. How and what? Read more about it here. 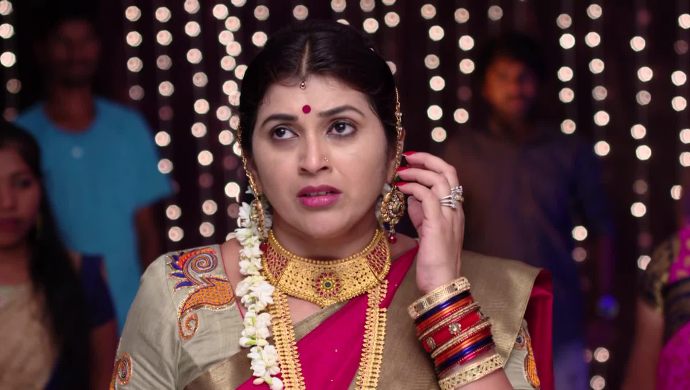 In the Telugu serial Ninne Pelladatha, Brahmini has been adamant on one thing — ruining Mrudula’s (played by Madhubala) life. Initially, she did not have a motive. But after Mrudula married Madhu, Brahmini vowed to avenge it as the couple lived together against Brahmini’s will. Also, this shattered Mansi’s (played by Sree Priya) dreams. That’s when the two of them teamed up to take back what they thought was rightfully theirs and be happy, once again.

But a long time passed since Madhu and Mrudula’s wedding and everyone had expected Mansi to move on with her life. In the meantime, a lot of drama happened in the lives of Brahmini, Madhu, Mrudula and everyone associated with the Kamineni family. Recently, Arjun decided it was high time for Mrudula to get some happiness. And the solution? Marry Mansi off, against her will if need be. Mansi resisted initially but gave in later. Brahmini even promised Mansi that Madhu (played by Abhi Prathap) will be her wedded husband. Since then, she has tried many ways to make this happen.

The D-Day is here. Just a few moments before the wedding is slated to take place, Swaroop, the man Mansi was supposed to get married to, elopes. Surprise! Surprise! This was also scripted by Brahmini. Madhu is asked to take the seat and marry Mansi, but he resists. What better than threatening to kill yourself and hold someone guilty? Well, nothing. And that’s exactly what Brahmini does. Komali and Sarayu add on to Brahmini’s plan. They ask if his broken marriage is more important than his mother’s life. This puts Madhu in a tight spot.

Should he choose his wife, the woman who loves him unconditionally? Or should he stand by his mother, the woman who cares about nothing but her reputation? Stay tuned to find out with us what Madhu decides to do.

Watch A Thriller That Will Stay With You In ZEE5 Original Kailasapuram, Streaming Now!

Would You Rather Choose To Be Around Sailaja Reddy? Or Would You Pick Mr Rao?