Birthday Special: Vijay Deverakonda Is The One To Ride High On Success Through Failures

The sensational actor, Vijay Deverakonda turns 31 today. Everything about him is known. So, we look at how he has been on top even through the lows. 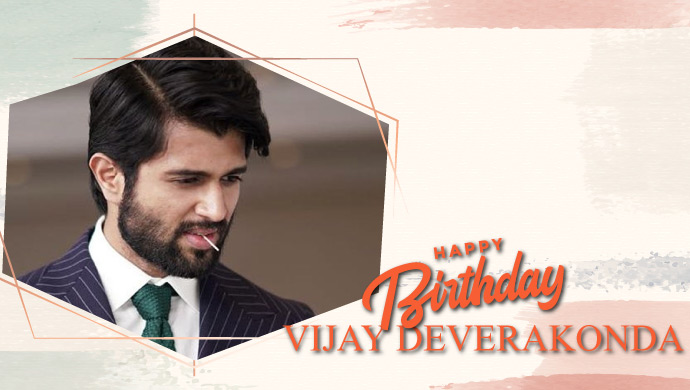 It’s the 9th day of May and we know that thousands of youngsters are finding a way to get their wishes across. Even in the lockdown, maybe children and elders are wondering if there will be an ice cream truck passing by their lane, distributing free ice creams. These thoughts and desires are all linked to one person – Vijay Deverakonda. The man who has been spreading smiles with his little deeds and shattering spaces with his cinematic existence.

Watch the trailer of his hit film, Geetha Govindam here:

Vijay celebrates his 31st birthday today, whilst being quarantined at home with his simple nuclear family. The young actor started out as a theatre artist who chanced upon a role in Ravi Babu’s Nuvilla, in 2011. A few cameos and short roles later, Vijay found his ground through Tharun Bhascker’s directorial, Pelli Choopulu. The National Award Winning film brought Vijay closer to Sandeep Reddy Vanga. And he gave Vijay the biggest breakthrough through Arjun Reddy, in 2017.

What exploded then has still not mellowed down. The fandom, the craze, the love and the unfathomable adulation… it all continues to grow with each breath for this actor. One may assume that the tough times are past him, and now on, there are only roses and flowers for him. Well, most of our minds crossed that thought. But reality had something else on the plate. As the actor’s success grew, his box office collection started to fall down. But something makes him stand out.

Wondering what? It isn’t an everyday phenomenon that success and failure get passed without affecting us. But this young man has a phenomenon, he says, “Keeping sane is a conscious thing”. And clearly, he has been practising it very well. After the mega-success of Arjun Reddy, Vijay bagged brownie points for his portrayal of a good-boy-next-door in Geetha Govindam and then a thriller-comedy, Taaxiwaala. That’s when the box office downfall began.

Vijay’s following films failed to impress audiences. However, fans’ love did not diminish. And, how could it? Vijay took every opportunity by the hand and expressed his truest emotions, without any restriction. We’d like to believe, it is this honesty that keeps him closer to the common folk. He engaged with them on social media and used his reach for all the right reasons.

At the brink of this new year, Vijay encouraged people to say the three magical words to their parents. Because that’s a tradition we have been successfully alienating in our culture and called it #DevaraSanta. As glory started banking in his accounts, the actor graciously rolled it out to help people. He started The Deverakonda Foundation, initially, a secret project. The actor announced that he aims to help at least a lakh youngsters in occupying their preferred job with complete training.

Early in 2020, Vijay set up his own production house named King of the Hill and announced his film, Meeku Mathrame Cheptha. This idea came when the actor denied working on it. But he called up the director and asked if he could produce the film. Around the same time, he also claimed his throne as the Most Desirable Man, for the second consecutive time. He also promises to hit a hattrick there.

As we all stay stuck in the coronavirus times, the actor has decided to claim his peace without guilt. Yet he found himself setting up a new project, the Middle Class Fund, to help the needy or stuck families. Like a diligent leader, he has been reporting to ‘his masses’ at 9 pm, daily. More recently, Vijay brought the whole of Telugu Film Industry together when he spoke about #KillFakeNews.

Earlier in an interview, Vijay said that it’s hard to not think. He added that something is constantly on his mind and that’s the only way he knows to function. When there’s so much going on, we wonder if nine hours of sleep is enough for him to claim peace. Whatever floats his boats, we’re happy to witness the revolution he is stirring up.

Watch the full film or Taxiwaala on ZEE5. Wishing the actor many more successful years and blockbuster hits, we sign out.

Mother's Day Special: 5 Traits Of Telly Mums Who Remind Us Of Our Amma At Home

Calling All Cinephiles! 7 Timeless Pieces Of Indian Cinema That You Cannot Miss