On the grand occasion of legendary filmmaker, Kashinadhuni Vishwanath garu's 90th birthday, let's take a look at his evergreen life. 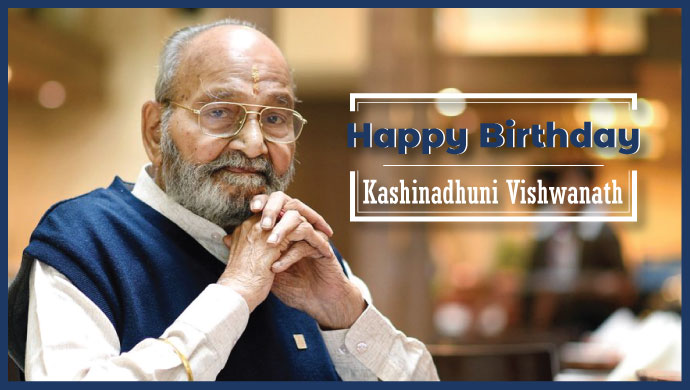 He has given innumerable film titles starting with ‘S’. He provided many actors and actresses a platform to showcase their potential. He heralded change, cinematically and socially, and continues to do it. An inspiration for filmmakers, actors and a visionary of our times, he is none other Kala Tapasvi Kashinadhuni Vishwanath garu. The talented personality turns 90 today. The man who can light up a room with his infectious smile and make us think with his cinematic masterpieces deserves a special mention in the history of our times.

Recently honoured with the Lifetime Achievement Award at the Zee Cine Awards, the legendary filmmaker left everyone with happy-tears and a wide grin. He thanked the Telugu audience for continuing to shower umpteen amount of love and blessings upon him. The visionary expressed his gratitude for receiving the award 10 years after he took voluntary retirement, through his Chiranjeevi, who he called to be his friend, colleague and a teacher in disguise.

He is born in the Kashinadhuni family, to Subramanyam and Saraswati. Vishwanath garu grew up in a small village, named Pedapulivarru, by the banks of River Krishna in Guntur, Andhra Pradesh. After completing his B.Sc degree at Andhra Christian College of Acharya Nagarjuna University, he joined his father. Mr Subramanayam, who worked as an associate Vauhini Studios in Madras, helped the young creative soul in becoming a Sound Recordist.

Vishwanath garu transitioned from being audiographer into making films, under the guidance and support of Adurthi Subba Rao and K. Ramnoth. What started in 1965 with Aatma Gowravam, he saw many highs in a career spanning 60 years and 53 feature films, in Telugu and Hindi. He wrote brilliant scripts and screenplays and gave life to his writing on the screen. Much later into his career, he also embraced acting as a character actor in many Telugu and Tamil films.

Right with his debut film, the filmmaker won the state honour of Nandi Award for the Best Film of the year. The following films, like Chelleli Kapuram, Sarada, O Seeta Katha and Jeevana Jyoti, that were women-centric, proved that the filmmaker was always ahead of his times. Then came the cluster of films with ‘S’, like Siri Siri Muvva, Saptapadi, Sirivennela, Sutradharulu, Subhalekha, Sruthilayalu, Subha Sankalpam, Aapadbandhavudu, Swayam Krushi, and Swarnakamalam.

With all of these films and the others, the filmmaker touched upon many social evils and problems. Each time, he wove out these evils into the storyline and gave a subtle commentary through his characters. His films spoke about everything from autism, western and Carnatic music, untouchability, mental and physically challenged characters, caste, colour, alcoholism, casteism and the ones in between. Through films, he always preached inclusivity and positivity.

Many of his films made way as a Special Mention at the Moscow International Film Festival and were also released locally, after being dubbed in the Russian language. A lesser-known fact is, the 1985 film starring Kamal Haasan and Radhika, Swathi Muthyam, was the official Indian entry at the Academy Awards. Having wished to work with K. Balachandran and Bapu, the filmmaker’s wish finally came true in 2015, with Kamal Haasan’s Uttama Villian.

One may wonder how good of an independent filmmaker Vishwanath garu was. But to everyone’s surprise, he found the perfect way of blending his stories into commercial cinemas. If one assumes that the films do not really make an impact, K Vishwanath garu’s films stand as testament. According to research conducted on South Indian music culture, Shanakarabharam broke not only box-office records, but also made people more proactive in learning traditional dance and music.

This yesteryear visionary has been honoured with five National Awards, six Nandi Awards, 11 Filmfare Awards, and an Honorary Doctorate by the Telugu University. In 1992, he was also conferred with the fourth highest civilian honour, the Padma Shri Award along with Raghupathi Venkaiah Award by the state of Andhra Pradesh. In 2017, he was given the highest honour of Indian Cinema, the Dadasaheb Phalke Award at the 64th National Film Awards.

Now, as the filmmaker relaxes in his hard-earned glory, we wish him nothing but all the happiness on his 90th birthday. You can watch his incredible performance in the Venkatesh starrer Adavari Matalaku Ardhale Verule on ZEE5.