Birthday Special: 60 Facts About Greekveerudu Nagarjuna For You, On His 60th Birthday

The man who has been stealing hearts and winning people, Nagarjuna, celebrates his 60th birthday today. Age is just a number and he proves it the best 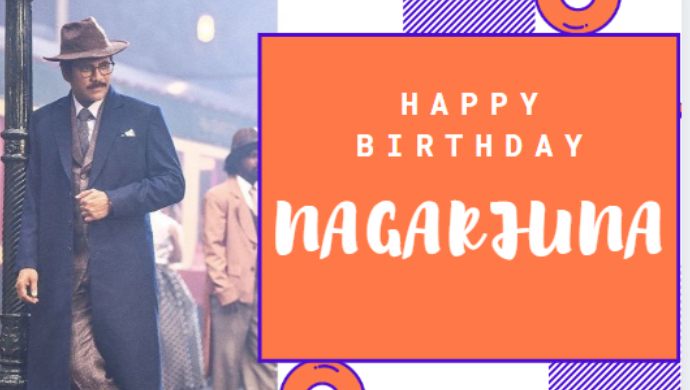 You may know him as the reigning King of Tollywood, Yuva Samrat, Greekveerudu, Celluloid Scientist, etc., etc.. The man behind all the monikers is none other than the handsome hunk who can give a run for their money to guys of any and every generation – Nagarjuna. On August 29, 2019, this man turns 60. But today, more than ever before, we have been made to believe that age is just a number… or maybe a word. You may have never seen a 60-year-old look this young and handsome ever before. But he’s more than just a pretty face.

We bring 60 facts about Nagarjuna on his 60th birthday. Check them out below.

1. Currently, Nagarjuna’s net worth is estimated to be around $50 million.

2. Nagarjuna was born to legendary actor and superstar Akkineni Nageshwar Rao and Akkineni Annapurna on August 29, 1959, in Chennai.

5. His first-ever film is touted to be in 1968, titled Sudigundalu, in which ANR played the lead role. However, he was also a part of Velugu Needalu.

6. It was in 1986 that Nagarjuna debuted as the leading actor with director V. Madhusudhan Rao’s Vikram. It also starred actress Shobana. With this film, he was established as the star son, Nagarjuna.

7. The 1987 film, Majnu was Nagarjuna’s first major commercial hit. He played Rajesh, an aggressive youngster who falls for a girl name Alekhya. But their marriage causes the main conflict in the film.

8. In 1989, Nagarjuna requested the iconic Tamil filmmaker Mani Ratnam to direct him in a Tollywood film. Initially, he met severe reluctance but eventually, Geethanjali came through. This film also went on to win several Nandi Awards and the National Award for Best Popular Film Providing Wholesome Entertainment.

9. It was in 1990 that Nagarjuna was re-established as an actor  – critically and commercially – with debutant director Ram Gopal Verma‘s cult classic Siva.

10. This film also went on to become King Nag’s official step into the Hindi film industry, popularly known as Bollywood. Siva received the same success there. Later, he worked in Hindi films like Khuda Gawah, Drohi, Criminal and more.

11. With Siva, the actor became popular for portraying a young, brash college student. In fact, he popularised the usage of cycle chains in a fight sequence.

12. Post this, Nagarjuna went on to work with many other debutant directors and emerged successful at the box office. This phenomenon was previously unheard of. Santhosham, Mass, Soggade Chinni Naayana are few of the many in this category.

13. In 1990, Nagarjuna separated with his then-wife Lakshmi Daggubati, the daughter of Dr D. Ramanaidu. Their son is the popular actor and young heartthrob Naga Chaitanya.

14. Later, he married Amala – his co-star in Siva and Prema Yuddam. Their son is Akhil Akkineni. They all stay together and are a big happy family.

15. The couple co-founded the non-governmental organisation called the Blue Cross Foundation which works towards the welfare of animals and preservation of animal rights.

16. Other than that, the actor also is the brand ambassador of HIV/AIDS awareness campaigns. In 2010, Nagarjuna featured in an animated software that aimed at tutoring about the disease. The software is TeachAID.

17. It is believed that Nagarjuna shares two extremely different equations with both of his sons. While he is friendly with Naga Chaitanya, he is fatherly with Akhil.

18. Other than Tollywood and Bollywood, this man has been a popular name in the Tamil industry too. He acted in Tamil films like Ratchagan and Payanam.

19. It is touted that Nagarjuna will make his Malayalam film debut with Priyadarshini’s Kunjali Marakker. It also features Mohanlal, Suniel Shetty and Paresh Rawal. However, there have been no recent reports.

20. In 2016, interesting the good looking man turned singer for his film Nirmala Convent. Aren’t you, too, wondering if there’s a thing that this man can’t do!

21. In his early career, Nagarjuna portrayed many devotional characters and basically become the poster boy for devotional movies. He was the only one, after NTR and ANR, to be successful in that stint for a long period of time.

22. For his film Annamayya, Nagarjuna bagged a Nandi award for the Best Actor. The film won two National Awards.

23. Having done a plethora of age-old films, Nagarjuna has never been a part of a period-film.

24. Despite being an out and out commercial film hero, Nagarjuna’s 2011 film, Gaganam made a massive success without any massy content.

25. How big of a ladies man Nagarjuna is, is not something to be particularly told. A man who made a film, Manmadhudu, with the tagline “he hates women” continued to get the same amount of love and affection.

26. Talking about ladies, he was reportedly dating Bollywood actress Tabu. In the later years, he has been linked up with newer actresses such as Anushka Shetty. However, they are only rumours.

27. Oopiri was another successful film that featured Karthi alongside Nagarjuna. For most of the film, Nagarjuna was restricted to dialogues and the only movement was through his wheel-chair. Yet he mesmerised us equally.

28. It is believed that he charges around Rs 7 crore per film.

29. Another one of Nagarjuna’s successful film remains Aakhari Poratam with legendary and late actress Sridevi.

30. So far, Nagarjuna has been associated, as the leading man, in over a hundred films.

31. He happens to be the only actor, across industries, to have worked with his sons and father in the same film.

32. The 2014 film Manam, directed by Vikram Kumar, features three generations of the Akkineni family. It also has Akhil, Amala and Samantha Akkineni in supporting roles or cameos.

33. Nagarjuna’s all-time favourite actor is Amitabh Bachchan and he, too, was a part of Manam in a cameo. The T-town actor considers this cameo as an honour to his late father.

34. Bollywood’s iconic actor Amitabh Bachchan and Nagarjuna shared the screen once again in an advertisement for a popular jewellery brand.

35. Soon, Nagarjuna will be seen sharing the screen with his favourite actor in the big Bollywood film, Brahmastra. It also features Ranbir Kapoor and Alia Bhatt. This film will mark his re-entry in Bollywood after 15 years.

36. In totality, Nagarjuna has shared the screen in Hindi cinema for 13 films.

37. His last Bollywood outing was in 1998, with Mahesh Bhatt‘s social-drama titled Zakhm. It went on to win the Nargis Dutt Award Best Feature Film on National Integration.

38. In his career spanning over three decades, Nagarjuna has been honoured with a National Award and almost nine Nandi Awards.

40. Given his bold choice of films and varied spectrum of roles, Nagarjuna has come to be referred to as the ‘Celluloid Scientist’.

41. In 2009, Nagarjuna made his debut as a television producer with the daily soap titled Yuva.

42. Later, he started reigning over the small screen by hosting the Telugu remake of the popular Hindi game show, Kaun Banega Crorepati. It is named Meelo Evaru Koteeswarudu.

43. For Meelo Evaru Koteeswarudu, he was honoured with the Entertainment Leader Award (Television).

44. Other than being the face on the 70mm screen and the small screen, this man also happens to be a producer. Hello, Ra Randoi Veduka Chudham, Manam, Uyyala Jampala, Mass, Ninne Pelladata are a few of them. His choices have mostly been commercially well-received.

45. Nagarjuna is the co-owner of Annapurna Studio, which was started by his late father and is named after his mother.

46. He has also established Annapurna International School of Film and Media (AISFM) which is located in Hyderabad.

47. Recently, he invested Rs 100 crore in five new, climate-controlled production floors in the Annapurna Studios which is spread over 22 acres.

48. The post-production facilities made available by the hero include state-of-the-art editing, dubbing, animation, computer graphics, digital interface and sound mixing rooms to filmmakers at a price that is apparently lesser than other studios.

49. After the leading and biggest studio, Ramoji Filmcity, Annapurna Studios is the second in the state to have adopted the digital route.

50. The studios are majorly into television shows and Nagarjuna says: “I think we still have a 90 per cent growth left on TV. With all our politicians giving out free TVs for votes, it’s the best thing to happen to us.”

51. The revenue made from daily soaps or television shows is up to 70% and brings in “a couple of lakhs per day”.

52. The estimated property of the Akkineni family is said to be over Rs 3,000 crores. It also includes the Annapurna Studios, lavish properties in Banglore and other entertainment businesses.

53. His house, which is situated in the prime properties of Jubilee Hills, alone is estimated to be priced at Rs 40 crores.

54. He is the co-founder of the N3 Realty Enterprises, they hold N-Grill and District N in the city.

55. The actor, who prefers being called a businessman, has set up a new Chinese Restaurant in Jubilee Hills, Hyderabad. It is named N Asian and the actor has personally overseen the developments and its interior decoration.

56. He also has added a convention centre in Hyderabad to his list of businesses and is often used for corporate events in the city.

58. That’s not all. He owns the Mahi Racing Team India along with ace cricketer Mahendra Singh Dhoni.

59. In line with his Automobile Engineering degree is his craze and obsession for cars. He owns a sweet Bentley, a Rolls Royce, a Range Rover, a Porsche and a BMW.

That’s all for now. We wish the actor a fantastic birthday and many more successes ahead!