If you missed out on watching the fun-filled extravaganza, we've got all the highlights covered for you right here. Check it out. 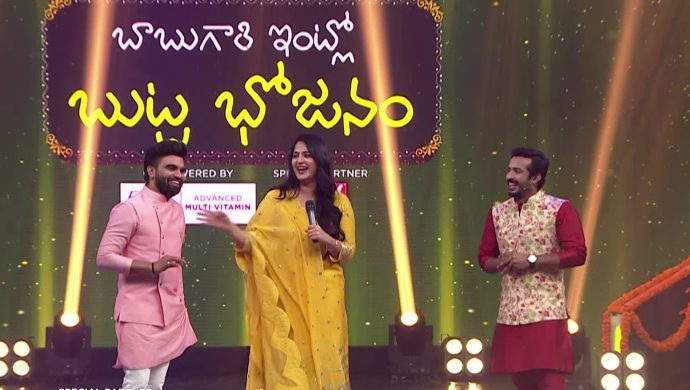 Ugadi is still a couple of days away, but our Zee Telugu family has celebrated it already. With the best of actors, stars, choreographers and industry talents, their luncheon was nothing but two hours of pure joy. Hosted by the tower star Nagendra Babu Konidela, the luncheon was called Babu Gari Intlo Butta Bhojanam. If you missed out on watching it, here are all the highlights you need to know.

The show started with Nagendra Babu and Tharun Master’s easy-breezy dance performance. This was followed by Bhanu and Ravi. The duo who is currently seen hosting Adhrindi grooved to Mind block. Next up, Bithiri Sathi came to the stage as Sittharala Sirapadu played in the background. He greeted everyone in his signature style and made us laugh.

Saddam, Bhaskar, Yadamma Raju and Parshuram of Gully Boyz made an entrance with medical masks and shook everyone. Jaani Master danced his way to the stage to his own song from iSmart Shankar. Chandra, too, danced to Shubhalekha Rasukunna from Kondaveeti Donga. TV’s darling, Anasuya Bharadwaj also walked to the stage to Ye Maya Chesave’s Kundanappu Bomma.

Princess of the Konidela family, Niharika Konidela made an entry and claimed the credits for work. When Pradeep called her a ‘guest’, Niharika proudly said that it was her father’s event and she was the one to decorate the house. Later, she performed with Gully Boyz and gave them a dose of their own medicine.

Shrashti and Jiya danced to a mashup of old and new songs in a fusion dance format. Their performance left the audiences wide-eyed and the choreographers could not stop praising them.

Next, RP and Venu joined hands with Shiva Shankar Master and performed a hilarious skit. It left everyone surprised and they couldn’t stop praising the ace choreographer’s comedic timing.

Anasuya surprised everyone with her three-minute performance. She showcased the story of Savitri, by dancing to Anurag Kulkarni’s Mahanati song. By the end of her it, everyone thanked her for showcasing the hub of talent that she houses.

Everyone knows that Niharika and Naga Babu share a deep bond. But she shocked everyone by rapping to Roll Rida’s OMG Daddy from Ala Vaikunthapurramlo. It’s another matter that Babu garu refused to understand the lyrics of the track.

Sathi sat with Ravi and Pradeep, as the wisest man in the house and took charge of reading the ‘fun-changam’. From taunting Ravi for his anchoring skills to digging out details of Pradeep’s love life, Sathi kept everyone laughing.

Chandra performed a skit that suits him best – the woes of a married man. This time, Jaani Master and Raghu Master tagged along to showcase the other side of men’s life who marry when they’re deeply in love. As expected, Chandra’s rage and comedy were on-fleek.

In the midst of such laughter riot, Ravi changed the mood and made everyone cry with his special performance. He danced to Chinnari Thalli along with his four-year-old daughter Viya. Their performance made Tharun Master come to the stage and shed a tear while Naga Babu held Niharika close to him.

Finally, the most important person of the day, Anushka Shetty, joined the Butta Bhojanam and greeted everyone with her unmissable smile. She also helped Niharika in making the Ugadi Pachadi and led everyone to the lunch table.

You can watch the full show here. Read more about Ugadi and everything around it here. Don’t forget to catch up on all the quarantine special entertainment right here on ZEE5.