In the latest episode of Attarintlo Akka Chellellu, Dharani snaps out of her beautiful dream about uniting with Vedavati. Read the full update here. 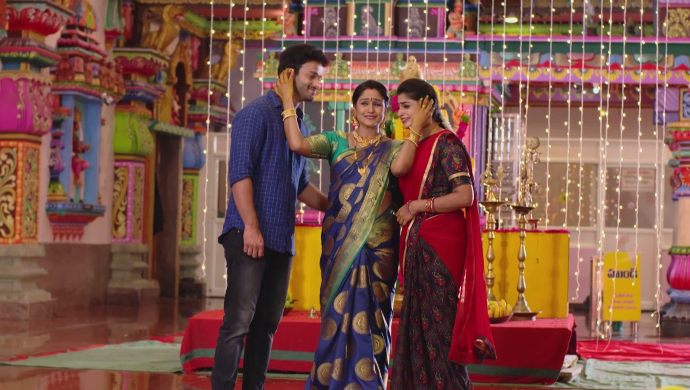 Earlier in Attarinlo Akka Chellellu, Dharani is sure that Vedavati does not have any ill feelings towards Aditya or her. She also concludes that Priyamvada has been the one to break relationships apart. Dharani goes and helps the people who were cooking for Vedavati’s Annadanam. She instils a new spirit within them and also serves food to people with the same excitement. When Vedavati learns about the girl who prayed for her son, she goes to find her but sees Aditya instead. Aditya tells her that he wants to stay away because Priyamvada told him that Vedavati wants to separate them.

In today’s episode, Aditya shares with Vedavati about all the things that Priyamvada told him about Vedavati. He also tells him about the proofs that Priyamvada gathered to show him. Vedavati is shocked to learn about it and keeps yelling that it’s all a lie. Vedavati tries to convince him that she would never want to take him away from his husband. But she definitely wants them to come back home. That’s when Dharani thinks that it’s time for her to meet her mother in law as well.

Dharani goes ahead but Vedavati mistakes her for Shravani. Vedavati asks her to meet Aditya, her younger son, and tell him about how much she wants her daughters-in-law to be happy. Dharani asks her to wait and listen to what she has to say. She then goes on to explain about her and Shravani and apologises to Aditya for never telling him about her family. Vedavati happily accepts her and they all sit together. But then the priest comes and offers the Aarti to Dharani and that’s when she realises that it was all a dream.

Dharani goes ahead and stands in the queue for the Vastradanam that Vedavati had planned. Once again, she covers her face with her saree, takes the clothes, touches Vedavati’s feet and silently leaves. The priest sees that Dharani had taken the set of clothes that had been specially blessed by the goddess for Vedavati and her husband. But Vedavati tells the priest that the blessing of the goddess will reach whoever they are supposed to. Dharani’s colleagues call her lucky for it and Dharani agrees with them.

One of Dharani’s colleagues’ husband had been waiting for his passengers outside the same temple. Dharani asks her colleague to ask her husband if he could help Aditya find a job as a driver. The couple agrees to help them. In the evening, Dharani goes back home and Aditya is surprised to see her so happy and bright. He asks what the matter was and then sees the bag with flowers and prasadam. Aditya asks if her gods have promised to fulfil all of her wishes.

EXCLUSIVE: Snehith Was Much Of An Underplay, Says ZEE5 Original Ala Actor Ankith…

Dharani thanks her lucky stars for the day that she had. Not only did she see her mother-in-law but she also sought blessing from her. Moreover, her doubts around Priyamvada are clear now, too. She tells Aditya that the wishes that she did not ask for, her gods her fulfiled them too. She hands over the new clothes to Aditya and tells him that she found a job for him and he must wear new clothes on his first day. Aditya picks her up and twirls her around. Dharani asks him to stop and then thinks about ways to make him find out the truth about his mother.

Simple Ways To Style Denim On Denim, Like A Aa Star Samantha Akkineni