In the latest episode of Attarintlo Akka Chellellu, Shravani comes to know that Dharani had gone to the court. Read the full update here 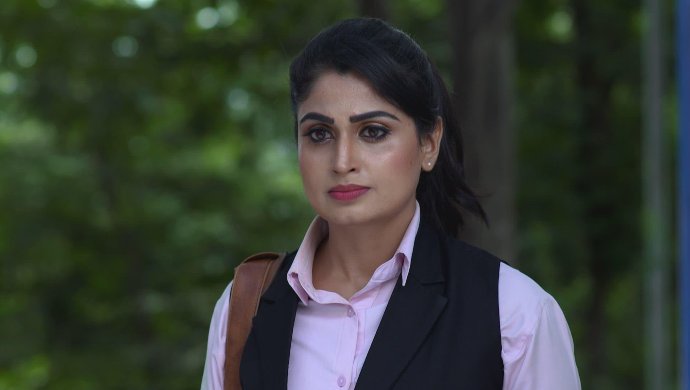 Earlier in Attarinlo Akka Chellellu, Dharani manages to get the documents from the girl and comes home to read them. She understands that it would take a lot of time but decides to go through it anyway. Aditya comes home and pours down the glass of water that Dharani has given him. He goes to get some water for himself but gets his palm stuck inside the glass by mistake. After many failed attempts, Aditya resorts to hiding it. Eventually, Shivudu and Hamsa try to get the glass out. Nothing works until Dharani goes ahead and tickles/caresses Aditya’s neck and face. Magically, the glass ends up falling out.

In today’s episode, Aditya realises that he is hugging Dharani and lets go of her. Shivudu, Hamsa and Dharani start laughing at his innocence. He sees this and glares at Dharani. She sees him and stops smiling until he goes back inside. They start laughing again. At night, Aditya goes to sleep and Dharani takes this moment to take out the property papers and starts reading them. The next morning, he wonders where she was since she did not come in front of him or bring the lunch box.

Aditya steps out and sees her, sad and upset, sitting on the chair. He thinks that it’s because of his harsh behaviour and decides to mellow down until he finds another way to set her straight. He takes out some money and taps on Dharani’s shoulder with it. She sees the notes and gets up from there, telling him that there will be no food at home and he can buy from any restaurant. Aditya leaves in anger and gets into his cab. Priyamvada calls him and is surprised to hear his voice full of anger.

Aditya tells Priyamvada that Dharani is the reason behind his anger and asks why she had called him. He asks if the documents are ready for him to sign. Priyamvada is happy to know that her little fire is still raging bright and loud with Aditya. She tells him not to worry about the papers. Because she will bring it to him once they are filed. Dharani comes out and tells Hamsa and Shivudu everything that she read and understood from the papers.

Dharani also finds out that the lawyer has smartly used Priyamvada’s name in the first 10 papers and then it is mentioned that Aditya’s shares will be transferred to Shashikala. Hamsa wishes the worst for Priyamvada and Dharani affirms that her fate will not be as bright as she thinks. Priyamvada finds a student to read the documents for her and offers to pay him Rs. 100 per page. The boy agrees and reads the first 5 pages. Priyamvada is satisfied to know her name in the 5 pages and lets the boy go.

Shravani goes to the court and a goon coming running towards her. He threatens to kill her and she slaps him in her own defence. Later, she sits on her scooter to process everything that had happened and the other lawyer, who had given her the case, comes to her. She tells Shravani to be careful of the goons and apologises for not sharing the risk as easily as she shared the commission. Shravani asks her what case and commission she was talking about. But the girl concludes that she is stressed and needs rest.

Tag Along The Reddy's In Their Quest To Power And More With The Suoerhit ZEE5 Original, Gods Of Dharmapuri