In today's episode, Vedavati thinks that the universe is hinting that Dharani is the chosen one for her son, Vikram. Read the full update here. 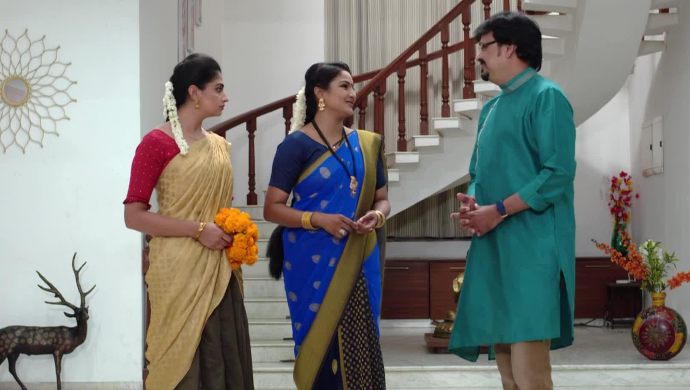 In the last episode of Attarintlo Akka Chellellu, Dharani tried to get hold of the thief and unexpectedly, Aditya saved the day. The two talked about Godavari’s questions to Aditya and decided to stay away from each other. Before leaving, Dharani tore the rubber band on Aditya’s wrist so that he doesn’t hurt himself anymore. Vikram asked him to throw it later, but Aditya refused to let it go.

In today’s episode, Aditya tells Vikram to let the broken rubber band remain near him. He asks Vikram about the recent incidents and Vikram agrees that Dharani likes Aditya. But before Vikram can register what Aditya was meaning to ask, Aditya storms off from the room. Dharani is out on the streets, carrying out her work when the minister’s goons spot her and confuse her with Shravani. They chase her with the intention of killing her. Dharani notices them and speeds up. The goons start running too. Dharani runs and almost dashes into Vedavati, who is extremely happy to see her. She asks Dharani to come along with her. Dharani thinks about being saved from the goons and agrees to go with the stranger.

Vedavati tells Dharani that she knows about their relationship, and it’s nitty-gritties. She tells her that although they tried to keep their relationship under wraps, Vedavati has known about them all along. Dharani connects the dots but refuses to speak a word. Finally, Vedavati introduces herself but Dharani asks her to stop the car so that she can go back home. But Vedavati insists that she come home and see her future in-law’s house. Shravani comes back home to collect her files and asks why Dharani keeps roaming the whole time. Shravani goes back into her room and a guest visits Godavari.

The old lady complains about how her son is hooked to what his wife says. She says how he has not been taking care of his parents because of the girls. Godavari gives her a reality check by saying how she was happy to know her daughter runs the house but is unable to accept it when her daughter-in-law does the same thing. She tells her to be happy as long as her kids are happy. The old lady asks what’s happening about Dharani and Shravani’s marriage and suggests that they must be wedded in the same house. Shravani overhears this and blasts the lady. Shravani tells her to stay away from their personal matters and leaves the house.

Vedavati takes Dharani to her doorstep but before entering the house, Dharani saves the tulasi deepam. Dharani thinks how lucky Shravani will be to marry into such a rich family. Vedavati thinks she is being hesitant because she isn’t sure if it’s a good day to enter the house the first time. Finally, Dharani gives in to the pressure and steps in. Just as she steps in, the garland hung on the door falls on her and Vedavati considers it to be a sign from the gods that she is meant to be the daughter-in-law of the house. She takes her inside and calls her husband to meet Dharani. Even he talks starts praising her and tells her to marry Vikram at the earliest. But during their conversation, Dharani finds the family photograph with Aditya in it. Stay tuned to know what happens next.

Watch Natural Star Nani Sweep You Off The Ground In The Sports Flick Jersey, Exclusively On ZEE5