In the latest episode of Attarintlo Akka Chellellu, amidst their fights, Dharani finds a way to get closer to Adiya. Read the full update here 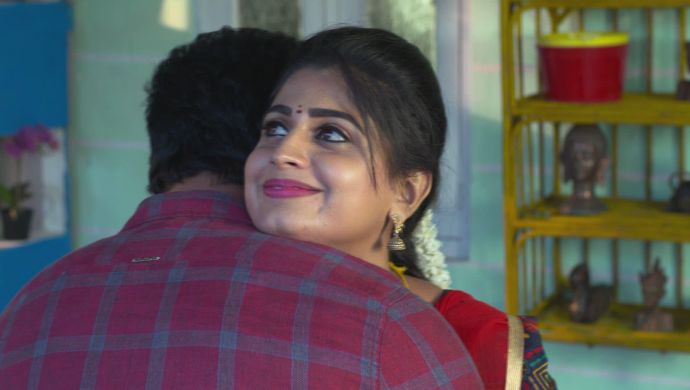 Earlier in Attarinlo Akka Chellellu, Godawari mixes some medicine into a glass of buttermilk and asks Shravani to have it. This causes Shravani to visit the loo multiple times. Thus, she cancels her plan to go to court. Dharani and F2 reach the court and find Shashikala’s lawyer. He hands over some files to a girl and Dharani goes to her. The girl ends up telling her about the pending case and Dharani finds a way to solve it. Finally, she asks questions about the files in the girl’s hand, which the latter ignores as a joke.

In today’s episode, Dharani tells the girl that she is simply inquisitive about the corporate case since she has never dealt with one. The girl thinks to herself that it’s an important case and one shouldn’t be sharing the information. But she also remembers how Shravani helped her. So, she asks her to keep the flash drive which has the soft copy of the documents. Dharani thanks her for the flash drive, takes it and leaves with F2.

The goon who had taken away the family’s property goes to another person for money. But the second man tells the goon that he will get nothing for those property papers and he must leave. The next day, Dharani sits with a dictionary and the documents to understand what was written. She thinks to herself that it would take a lot of time but she has to do it. Aditya comes home and Dharani quickly hides the papers. She gives a glass of water to Aditya as soon as he steps inside their room.

Aditya takes the glass and pours the water. He tells Dharani that the days when he would fall for her word or a glass of water are gone. He drops the glass and tells her that he can serve himself water. Aditya goes close to the water pot and takes a bigger glass to get some water. However, he slips and ends up getting his palm stuck inside the glass. In order to avoid any embarrassment, Aditya warns Dharani to prepare dinner by the time he has a bath and leaves.

Aditya tries multiple ways to get the glass out of his palm but fails each time. He gives it up and asks for dinner while hiding his hand behind. Hamsa and Shivudu join them too and try to see why he was eating with a spoon and with his left hand when he could eat perfectly with his right hand. Aditya tries to divert the topic but Hamsa finds it out. When everyone starts laughing and asking him how he got into the mess, he tells them to focus on the solution and not the problem.

Shivudu tries pulling the glass out of his hand but fails. Hamsa tries to rub some oil on his palm and get it out but she fails at it, too. Dharani tells them that she has a way to get it out. If he needs help, he can ask for it. Hamsa becomes Aditya’s spokesperson and asks Dharani to do it. She tells him to raise his hands, look into her eyes and follow what she says. Aditya shows his displeasure but finally does it. Dharani goes close to him, throws her arms upon Aditya’s shoulders and starts to caress his face.

Aditya finds it ticklish and asks her to get the glass out of his hand instead of flirting with him. Dharani asks him to raise his hands again, extend his fingers and turn his palm downwards. Aditya gives her the ‘you couldn’t do anything’ look. But the glass falls down. He is surprised to see this and ends up hugging her tightly in front of anyone.

Who Is Rana Pratap, The Boy Annoying Nithya In Kalyana Vaibhogam? Details Inside!