Dharani starts affecting Aditya more than ever before, just because of one action. Read the full update here. 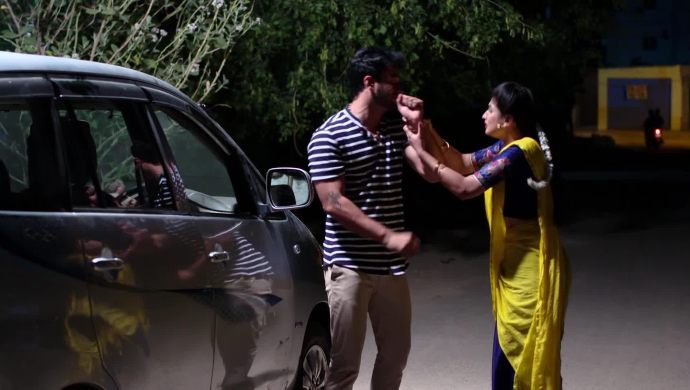 In the last episode of the Telugu TV show Attarintlo Akka Chellellu, Dharani meets Vikram on the streets, who thinks that she is Shravani. He is about to confess his feelings, but she stops him by acting like Shravani and asks him to get back to work. Aditya visits the food stall once again and eats the entire dosa that Saiydamma served with an extreme amount of chilly powder mixed in it, silently thinking that Dharani was standing next to him. Watch what happens next:

In today’s episode, Dharani wraps up her stitching work because it disturbs Shravani and asks her mother to sleep, too. Aditya continues to think of every memory involving Dharani. He puts his head down and hurts himself by pulling the rubber band on his wrist, Vedavati walks into his room to see this. Dharani moves her work outside the house, so as to not disturb anyone. A man covered in a black scarf comes close to Dharani and steals the clothes lying next to her. Dharani runs behind him, yelling ‘donga donga‘ (thief). Aditya takes his car and comes back to Shankarayya’s food stall, but is disappointed to not see Dharani around and drives away.

Aditya halts his car in a lonely street and thinks why would Dharani want to marry someone like Shankarayya and live a life like that. That’s when Aditya hears someone call ‘donga donga’ and gets hold of the young boy who was stealing her stuff. He stops himself and slaps the young boy but soon Dharani stops Aditya from slapping him anymore. She tells Aditya that she knows the boys and softly makes him understand. He promises to never steal again. Then she asks Aditya about why he was standing out on the road so late at night. He asks her about why her mother asked him about liking Dharani. Aditya tells her that he has been thinking of that question and has been unable to do anything.

Aditya turns to Dharani and asks if he likes her or if she told her mother about his feelings for her. Dharani wonders how to tackle the situation. She tells him that she must have asked the question considering his behaviour on her engagement day. Aditya asks just because he wanted good for her, does it mean something? He further adds that even Dharani has been wanting the best for her. Does it mean she also has feelings for him? Dharani tries to tackle his questions by saying that one must not ask such questions to a bride-to-be. In anger of not being able to forget her and not finding the answer, he starts hurting himself again.

Dharani tries to stop himself but he wouldn’t listen. She tries to pull it out of his hand but cannot, finally, she bites the rubber band off his hands and tells him to go away. He offers to drop her but she refuses by saying that she does not want him lurking around his house. Very gently, Aditya asks when will they meet again and Dharani replies rudely. The next morning, Godavari finds Dharani outside the house stitching clothes and asks if she slept at all. Narayana walks in and complains that he was unable to sleep due to her sewing machine’s sound. Godavari collects the milk from the milkman and comes to Narayana for the money to pay him. He doesn’t have money and Godavari had to give away rest of the money to Shravani.

Dharani steps in and tells them that she will bring money in 5 mins by collecting her payment for the clothes that she stitched. But Narayana insults her. That’s when two nuns come to her doorstep and pay her, along with giving her blessings. Aditya keeps looking at the broken rubber band in his room and Vikram sees him. Vikram compliments Aditya for forgetting Dharani successfully. Vikram suggests throwing it away but Aditya stops him.