In the upcoming episode, Dharani finds out that Mallesh is coming behind them and they start running again. Read the full update here. 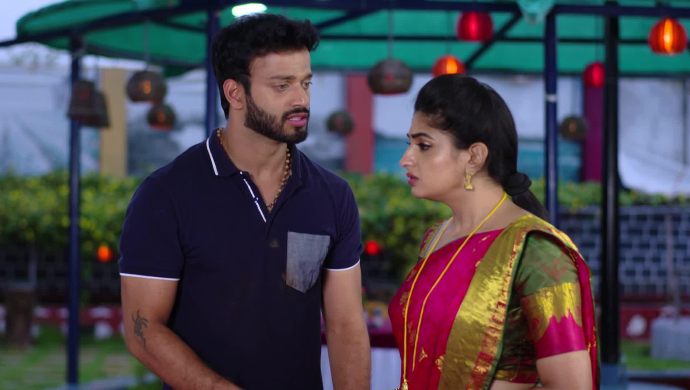 In the last episode of Attarintlo Akka Chellellu, Aditya and Dharani find a safe space and take some rest. But since Aditya was hungry, they look for a restaurant to eat. There, a few men speak about Dharani in a demeaning way. In order to avoid fights with them, Dharani takes the situation in her hands and then warns Aditya to start controlling his anger and aggression, telling him that the consequence would be bad otherwise.

In today’s episode, a man in the same restaurant as Dharani and Aditya gets a text from Mallesh asking for help. The man calls Mallesh and informs that the girl in the picture he had sent is there in the restaurant along with a boy. Mallesh is furious and asks him to stay there and keep an eye on them until he reaches. Shankarayya gets a call from Mallesh and Saiydamma answers it. She tells him to stay there until Dharani is brought back. Shankarayya tells him that it’s wrong to separate a husband and wife, but his mother doesn’t let him move from the wedding hall. Shravani is happy to know that the boys are bringing Dharani back.

Mallesh reaches the restaurant and decides to be cautious this time. He plays it cool as he knows that Aditya can beat him up if he finds out about him. Aditya leaves for a second and Dharani gets a glimpse of Mallesh and his men. Aditya returns and asks Dharani to pay the bill because he forgot his wallet. Dharani is taken aback because she has no money either. Aditya suggests that he give away one of his jewellery pieces. But the server takes a look at them and tells them that the jewellery is not real gold. Aditya insists that they will pay the bill later, but the server will have none of it.

Mallesh’s friend takes the opportunity and pays their bill, on Mallesh’s insistence. He asks if they have eloped, and Aditya agrees. The man offers them a place to stay and even says he can help them in finding a place. Aditya agrees but Dharani refuses to take his help. That’s when another man arrives at the scene and asks Mallesh’s friend to pay his loans off. Dharani tells Aditya to escape since Saiydamma has sent men to get hold of them. As the two men get busy arguing about the loan, Dharani and Aditya escape and Mallesh follows them. At one point, Dharani and Aditya get into the backseat of an old car with tinted window glasses. Mallesh’s gang fails to see them and go another way.

Aditya steps out and wears his shoes again and Dharani seems to be panting behind him. He tells her it’s safe to step out and offers his hand, Dharani follows. As she takes a few steps, Dharani steps on a pile of broken glasses on the road and hurts herself. Aditya helps her get rid of the glass pieces that are hurting her.