In today's episode, a few unexpected events take place one after the other and Dharani is able to gather money . Read the full update here. 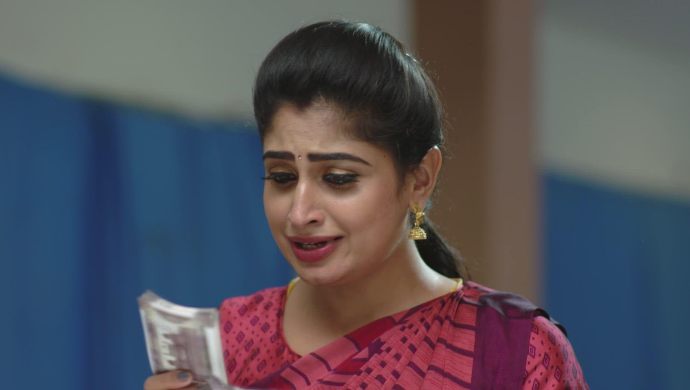 Earlier, in Attaritlo Akka Chellellu, Vedavati worries about the newly-wed couple she came to know about in the hospital. Vayuputra and Priyamvada tell her to not worry about them. But Priyamvada’s taunting tone is unbearable, so Vedavati tells her to watch her words. Aditya waits for Dharani and finally, she comes back. He calls Vikram to ask for help. But Priyamvada picks up the phone, as Vikram was busy with Vedavati. Priyamvada lies to Aditya about the family’s attitude towards him and offers to help by meeting them. Vikram overhears some of the conversations but finds something fishy. So he decides to follow her.

In today’s episode, Aditya asks Dharani to swear that she will not send him away to his family. Dharani promises but keeps wondering about how she could help their situation. One of her last hopes was Aditya parents, but now he has denied her of it. She excuses herself to find the remaining amount. Priyamvada leaves home to meet Aditya secretly. Vikram follows Priyamvada but tries to stay away from her vehicle. However, at one point, Priyamvada sees him.

Shravani writes her notes when Godavari bangs her lunch plate on the furniture. Shravani gives her mother a death stare and Godavari tells her to keep it to herself. Shravani tells her to tone down on her attitude because Dharani isn’t doing any better anyway, as she would expect. Godavari tells Shravani that Dharani will find happiness wherever she stays and leaves the room. Shravani takes out her phone to see Dharani’s location. When she sees ‘Jagdish Market’, Shravani is assured that Dharani had to sell her phone for survival.

Dharani passes by a street, lost in her thoughts, and a man steps down from his car to meet her. He thanks Dharani for arguing his case well in the court and gives her the fees. Dharani understands that she has been mistaken for Shravani and takes the money instead of saying anything. She then wonders if she should return the money to Shravani or if it’s a god-sent help. She decides to keep it and turns around to find Vikram staring at her.

Vikram asks when she would like to meet him since they haven’t spoken after his identity revelation on TV. Dharani pretends to be Shravani and asks him to call her the next day. Priyamvada sees them together and thinks of Dharani to be too a shrewd player. She leaves to meet Aditya and Vikram returns too. Suddenly, he remembers his task and wonders where Priyamvada had gone. She reaches Aditya’s hospital room and manipulates him.

Priyamvada tells Aditya that nobody in the house wants to talk to him or meet him. She tells him that they have stopped talking to her as well because she has been defending Aditya. Vedavati is hellbent on fulfilling her revenge on the girl Aditya married instead of bringing her son back and taking care of him. Aditya shares that his wife has been going through hell because of him and he doesn’t like it. Priyamavada tells him that she would help, but she cannot.

The nurse enters to tell Aditya that his wife has paid the money and the operation will begin in an hour. She asks Priyamvada to leave and also that she can meet his wife at the reception. Dharani begs the receptionist to accept the Rs 50,000 that she has gathered and take the operation ahead. But the receptionist cannot allow that and asks her to talk to the doctor. A doctor walks towards Dharani and gives her a bundle of money. He tells Dharani that a couple had come and offered the money to her and her husband.

SATURDAY SPECIAL: Happy Wedding Jukebox Is What Every New Age Couple Will Connect With