In the latest episode of Attarintlo Akka Chellellu, Dharani gets a perfect time and opportunity to go to the court. Read the full update here 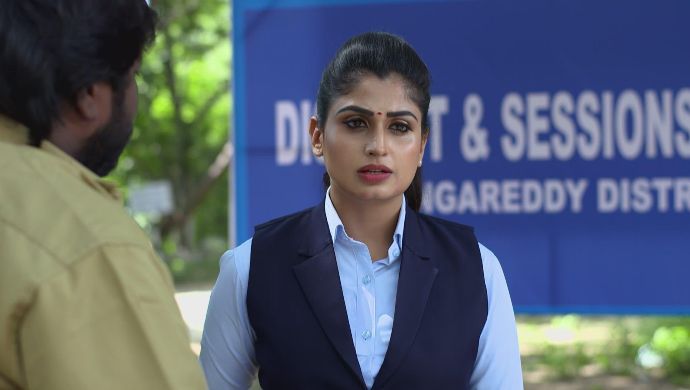 Earlier in Attarinlo Akka Chellellu, Dharani and Aditya travel together. He gets annoyed by her talking and coming close to him, so he tells her to sit in the back seat. They have a brief moment of being close to each other when Aditya helps Dharani to open the door. Once she sits behind, she stares at him through the rear-view mirror. Aditya gets annoyed again and they listen to a radio channel that discusses love between couples after marriage. Once Dharani gets down, she tells Aditya to have the lunch she had packed for him. Aditya fails to throw it away and keeps it. Dharani meets Godawari on the way and tells her to keep Shravani away from the court.

In today’s episode, Godawari tries to calmly ask Shravani to stay at home but she has an important case to deal with. Godawari goes inside and mixes some medicine in a glass of buttermilk. She gives it to Shravani and tells her to have it before leaving because it’s sunny outside and she will be travelling on the bike. Shravani has the buttermilk and tells her client on call that she is leaving from home. But soon, she starts to feel weird in her stomach and has to go to the loo.

Godawari is sad to see her daughter in so much trouble but is also satisfied that her other daughter could get some time to complete her work. Shravani comes out and goes back into the loo. She calls her client and tells them that she cannot be at work today. Dharani reaches the court with F2 and sees the scenario before stepping out. She spots Shashikala’s lawyer and goes close to him while standing behind the trees. She finds out that they will be documenting some files related to Priyamvada and her in-laws.

Dharani goes to the girl who has been assigned to complete the documentation work. However, she has no clue about how to start the conversation and get details about the file. The girl with the file sees Shravani and goes to talk to her, unaware that she’s Dharani. When Dharani tries to talk about the file in her hand, the girl asks her to get done with the case that has been pending for three days now. She points out to the poor family and the goon who had captured their house and Dharani goes to deal with them.

Thankfully, Dharani solves the case without having to step inside the courtroom. The goon returns money and property to the family and they thank Dharani for the help. She asks them to keep the extra money and takes only the lawyer’s fee. She hands over Rs. 3 lakh to the girl and then asks about the file again. The latter tells Dharani that it’s a corporate case. When Dharani asks if there’s something special about it, she tells her that it’s funny to hear such questions coming from her.