In the latest episode of Attarintlo Akka Chellellu, Dharani convinces Aditya to pray and she goes and talks with the thief. Read the full update here. 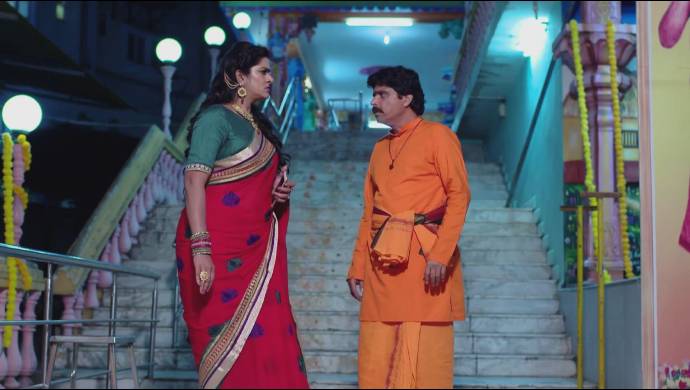 Earlier in Attarintlo Akka Chellellu, Dharani stops Durgamma from calling the police, and makes an announcement in the temple. People come and drop flower petals in a hundi. As per her suggestion, the thief drops the haaram in the hundi, too, and Durgamma commends Dharani. She also decides to adopt the orphanage. Vikram taunts Priyamvada for blaming Dharani unnecessarily.

In today’s episode, seeing Aditya is lost in some thought, Dharani walks up to him and taunts him. This angers him for a moment, however, she drags him to the idol of Lord Shiva. She asks him to pray whole-heartedly. As he begins to pray, he notices that she is not near him. Meanwhile, the thief meets her and confesses his mistake. She listens to his situation and gives him her gold bangles.

Meanwhile, Priyamvada goes back to meet her husband. He is cleaning the floor as she comes to talk with him. She questions his motive for this new avatar of his and he doesn’t reply directly. She goes on to ask him about their daughter and he denies telling her anything. He asks her to focus on throwing Dharani out of the house before worrying about anything else.

Dharani returns to check up on Aditya who is waiting near the idol. As they both begin to talk about things, the conversation changes into an argument. Aditya warns her to never bring the topic of love again and storms away. She feels sad after this and prays the Lord to help her out.

Durgamma is impressed to see how Dharani managed the whole situation earlier. She runs out to talk and praise her in front of the whole family. Hearing this Priyamvada worries if everyone will change their opinion on Dharani now. She openly criticises Dharani causing others to walk away from this discussion.

Dharani, on the other hand, meets Shobanraju and talks with him. She advises him to not do anything stupid. While talking about Karma, she mentions how good things will happen to good people. This angers him, but he remains calm. Dharani warns him to be careful and not do anything radical. Later on, she is seen worrying about all the incidents that have happened until now. As she thinks about them, she wonders how she can solve them.

Take A Trip Down The Memory Lane With The College-Drama, B Tech On ZEE5