In the latest episode of Attarintlo Akka Chellellu, due to Dharani's prayers and other forces, Shravani ends up sitting for the pooja. Read more here 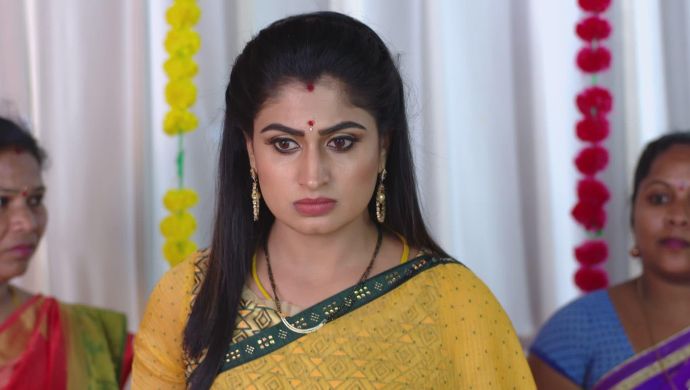 Earlier in Attarintlo Akka Chellellu, Dharani goes to meet the doctor. Aditya tells her that he has bitter memories attached to the place hence he will not go inside. Dharani asks if the doctor prescribed the medicines to Aditya. The doctor happens to be involved with Priyamvada, he assures Dharani that the medicines will help him. And then, he calls Priyamvada to convey about Dharani’s visit. She thinks of ways to get her husband out of jail so that she could find her daughter. Later, Vedavati disappoints Priyamvada by telling everyone that Aditya and Vikram will be fasting for the whole day. Shravani goes to the court and asks Vikram to manage the situation at home.

In today’s episode, Dharani panics when she finds out that her sister is going away, despite Vedavati’s request to stay for the pooja. Dharani prays to her goddess to do some magic and make Shravani sit for the pooja. Shravani argues with Vedavati and Vayuputra and leaves to go to court. Vayuputra defends Shravani by saying that her clients cannot be waiting for her always, and they must understand her situation. But as she leaves, a bunch of ladies come for the pooja. They ask Shravani to stop and thank her all that she did for them (reduce her wedding cost and help the employees with better houses.)

Shravani is unable to react, because the decision was taken by Dharani, against her will. She smiles and lets it go, but the ladies drag her back into the house and ask her to stay for the pooja. Dharani’s face lights up when Hamsa tells her that Shravani is coming back. Vedavati asks the priest to get started when Dharani asks her to wait for Shravani. Vedavati is happy to see Shravani coming back for the pooja – unlike Priyamvada, who is sad to know that she will not be seeing anyone unhappy in the house. She decides to concentrate on getting the special medicine into Aditya and Vikram’s food, and decides to mix it with the panakam.

Shashikala calls the Bihar Goons and asks them to kill Aditya and Vikram. Priyamvada takes the plate full of Akshanta and goes around the hall, distributing it to everyone. In the end, Priyamvada mixes special medicine in the panakam. She goes out to call Shashikala and gives her the good news. When Shashikala finds out that she mixed the medicine in panakam, which will be consumed by everyone, Shashikala starts worrying. She claims that it is poison!