In the latest episode of Attarintlo Akka Chellellu, Godawari meets Dharani on the way and they talk about the new house. Read the full update here. 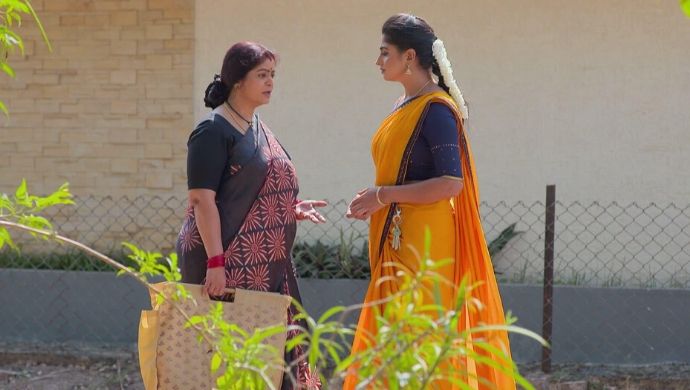 Earlier in Attarintlo Akka Chellellu, Priyamvada wakes up from her daydream soon after receiving the keys from Vedavati. Dharani and Aditya have yet another silly argument where Aditya asks for Dharani’s reason for ignoring his “lovers” game. Meanwhile, Vedavati, Hamsa and Priyamvada reach home. Upon knowing everything that happened, Vikram tells his mother to avoid rushing into any hasty decision. Vedavati calls Dharani and tells her to never do anything that would break their trust on her (Dharani).

In the latest episode, Priyamvada, Shobhan Raju and Shashikala get on a call again. Priyamvada starts ranting about everything that happened and taunts her husband for bad planning. Shobhan Raju understands the situation. He tells them that they need to find a way to tamper with the relationship between Vikram and Dharani. The lawyer tries to caution Shashikala for depending on a criminal locked in jail. Upon seeing her confidence in Shobhan Raju, the lawyer decides to level up his game and beat the other man, acting to be his obstacle.

Dharani ponders over Vedavati’s words when Aditya comes and sits next to her. Having remembered Mata Ji’s advice, he lets go of his addiction for the tablets and gives another try to his relationship. When Dharani and Aditya start talking again, he asks her to learn driving again. Dharani tells him to avoid scolding her for every mistake since she has just started learning. At one point, Aditya bends down to touch Dharani’s feet to guide her on how to release the clutch. That’s when they get lost in each other’s eyes. Aditya tells her that he cannot be distracted or else there would be an accident inside the car, and one outside.

Later, Dharani fails to stop the car when Aditya asks her to. This results in Aditya scolding her again. But this time, Dharani decides to stop learning and walks away. Aditya tries to follow her but goes back to take the car. On the way, Dharani meets her mother who is happy to see that her daughter can be upset and expect her husband to make up for her. Godawari also talks about the new house and says thanks to them. Aditya gets his car out but is unable to see his wife anywhere. Dharani keeps wondering why Vedavati bought her parents a house but did not inform them.

5 Reasons You Need To Visit Indonesia’s Most Popular Island, Bali, Like…

Fashion Friday: Anupama Parmeshwaran Personifies How Beautiful A Girl In A Saree…