In the latest episode of Attarintlo Akka Chellellu, Dharani goes to meet the doctor to get some clarity about Aditya's medicines. Read more here 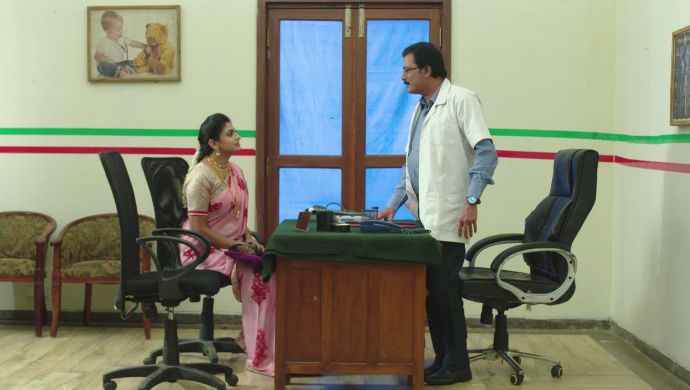 Earlier in Attarintlo Akka Chellellu, Aditya feels enraged when Priyamvada forces him to have the teertham. He throws the vessel away and walks off into his bedroom. He tells Dharani about what happened and falls asleep. Dharani starts introspecting everything happening around Aditya and concludes that the tablets are the cause of all the trouble. She decides to meet his doctor. Shashikala gets agitated when Priyamvada informs that she has failed again. Shashikala asks her henchman to contact the Bihar gang to kill Vikram and Aditya. Dharani sees two strangers outside her house. Before she could do anything, Aditya comes and offers to drop her wherever she was going.

In today’s episode, Aditya drops Dharani at the location and then looks out. He asks if she is going to meet his doctor, and informs that Vedavati always brought him here. Aditya exclaims that he hates the place and has many bitter memories. Dharani assures him that she is going to meet her friend. She goes inside and meets the doctor, as planned. The doctor asks her about the problem, and Dharani explains Aditya’s current situation. She hands him the bottle of medicines and asks if he prescribed it. The doctor happens to be involved with Priyamvada.

The doctor assures Dharani that the medicines should fix the problem and excuses himself. Dharani goes out and the doctor calls Priyamvada. He informs her about Dharani’s visit and asks her to more careful about the medicine. When Dharani reaches close to the car, she cannot see Aditya and starts panicking. But he arrives in a few moments and informs that he had gone away because he couldn’t stand close to the hospital. She tickles him to lighten up the mood, and they drive back home. Dharani decides to keep him as happy as possible. But she also thinks about how the medicines have been making him worse.

Priyamvada recalls her last meeting with Shobhan Raju. He insists her to find a way for him to get out of the jail – and in return, he would reveal the details about their real daughter. Priyamvada keeps thinking about how she could convince her brother, Vayuputra to let him out. She goes to collect the medicine from Shashikala’s henchman again. Vedavati tells Aditya that he has to keep a fast, all day, due to the Ashta Laxmi pooja. This disappoints Priyamvada, who thinks of how she can get the medicines into Vikram and Aditya. Vikram asks Shravani to inform Vedavati before heading out for work, but she asks him to manage.