In the latest episode of Attarintlo Akka Chellellu, Vedavati asks about Priyamvada's whereabouts but she gets upset over it. Read full update here. 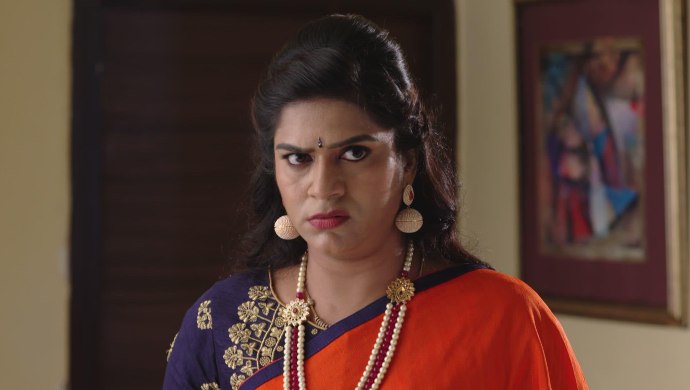 Earlier in Attarinlo Akka Chellellu, Priyamvada saves Dharani from Mallesh and his boys. She tries to convince Aditya and Dharani that Vedavati is the person behind all the misdeeds in their lives. Aditya is convinced but not Dharani. So, Priyamvada plays a phone recording that proves Vedavati has ill intentions towards Aditya’s wife. Priyamvada tells Aditya to keep their relationship discreet from Shivudu and tells Shivudu to avoid revealing her identity to Aditya. Shankarayya starts annoying Saiydamma by asking about Dharani’s whereabouts but she lashes out on Mallesh.

In today’s episode, Mallesh tells Saiydamma about what happened. Shankarayya blows a whistle and tells that whoever tries to bad to Dharani will be blown to ashes. He tells Mallesh and Yadagiri that they are young and unmarried. They must get out of this place and do something good for themselves. Saiydamma thinks to herself that she will wait for four more days just like her brother asked her to. Priyamavada returns home and Vedavati expresses her concern towards her.

But Priyamvada gets annoyed at her concern and asks if the house is a hostel or if she is a small child to be asked all the questions. Vayuputra walks in and tells Vedavati to let her be and promises to talk to her. Priyamvada walks out of there and goes into her room. She takes out her mother’s photo and starts talking about how everyone has been treating her badly. She continues that the day isn’t too far when she will get what she wants and both of them can be happy where they are.

9 Years Of Glory And Entertainment! Here’s All You Need To Know About Zee…

Did You Know Akka Chellellu Actor Chaithra Rai Is A Selfie Addict Just Like Us?

Vayuputra sees Priyamvada holding a picture and snatches it to get a better look. He closes the door and asks Priyamvada what was wrong with her and why she had her mother’s picture. He asks Priyamvada what she had been cribbing about. Vayuputra adds that not even Vedavati knows about them being step-siblings. Vayuputra does not want anyone to look down upon Priyamvada and so, he has kept this a secret and she mustn’t bring it out, for her own good.

He asks if she needs anything at all and affirms to make it happen. Priyamvada tells him that she wants something but she will ask for it when the time is right. She asks him to promise that he will not deny it when she asks for whatever it is. Vayuputra hesitates but agrees. Aditya wakes up yelling for Dharani because he had a nightmare. Dharani sits next to him and sees the bruise on Aditya’s shoulder. She asks him to take his shirt off and gets a warm salt tied in a bag to massage over the bruise.

She sees another mark on his body and Aditya explains that he got it when his aunt tried to feed him milk but it fell on his body and got a bruise. Dharani thinks to herself that the things Priyamvada says and does not do sync well. As Dharani starts to massage the bruise, Aditya talks about how he sad about what his mother is doing. Dharani tells him that sometimes what we hear or see can be misleading. Aditya gets angry and asks her to believe all that Priyamvada has said about Vedavati.

Dharani thinks to herself that she must do something that will make Aditya find out the truth himself. Aditya says that he is feeling better and turns around. But adds that he feels pain in his chest and asks Dharani to come closer. Dharani pushes him away and Aditya pulls her closer. The two get lost in each others’ eyes. Shivudu passes by their room and becomes furious upon seeing this.

6 Vintage Fashion Elements To Bring Back This Season, Like Jersey's Sara