In the latest episode of Attarintlo Akka Chellellu, Dharani finds a way to travel with Aditya in his own cab & he cant deny. Read the full update here 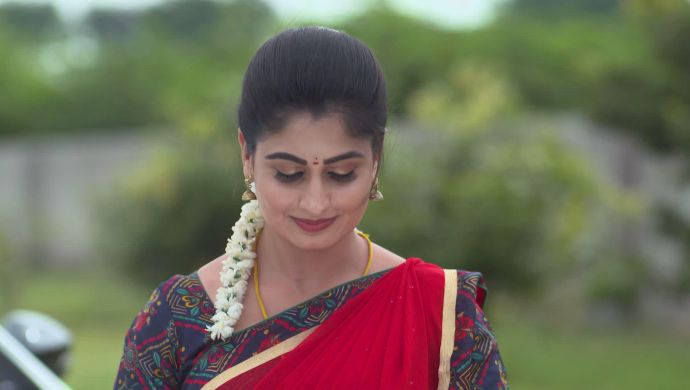 Earlier in Attarinlo Akka Chellellu, Dharani listens to everything the lawyer and Shashika discuss with Priyamvada. She starts being more cautious about Aditya. When Dharani leaves, the lawyer sees her and expects her to be Shravani. He sends his men to bring her back. But she crashes into Aditya’s car and he offers to drop her home. On the way, they talk about Aditya’s miserable life and Dharani loses her calm twice. But she asks him to drop her a little further and chooses to walk home alone.

In today’s episode, Dharani gets down from Aditya’s cab and the file falls off her lap. She bends down to pick it up and Dharani’s mangalsutra comes out. She freaks out and looks at Aditya but he is busy on his phone. She quickly gets back up and hides her mangalsutra. She asks Aditya how much he needs to be paid but he lets go her without paying. Dharani decides that she cannot let Priyamvada go away easily.

Priyamvada meets Aditya in an isolated place once again. She tells him about the 42% stake that he holds the company. She informs him that his mother and brother want his approval and attendance at the board meeting. Aditya starts cross-questioning Priyamvada and asks if it’s their plan to pull him back inside the house. Priyamvada finds it difficult to get him to sign the property papers but she is also happy to know that he does not want to separate from Dharani. That, otherwise, would be another problem for her to deal with.

At night, Aditya comes home and dashes with Dharani. Their foreheads bang, they step away and Dharani hits him again. When Aditya questions her move, Dharani informs that it was he who said that if you hit return the ‘head-bang’ you will end up with horns. Aditya lets go of it and Hamsa comes in with a bowl of food. She asks them to eat and Aditya hands her over the lunch box along with some money, demanding for his dinner. Dharani starts serving him and asks if his ‘restaurant food’ is delicious enough.

Aditya tells her that he couldn’t even eat it, his friends ate and said it was as good as grass. Dharani feels sad but soon, he finds the chutney-stain on his shirt. She tells Hamsa about it and Hamsa starts asking questions about the stain, sarcastically. Aditya’s lie is caught and he runs out of the house with his plate of food. Dharani, Hamsa and Shivudu have a good laugh about it and call it a night. Late at night, Vikram and Vedavati worry about Priyamvada because she hadn’t come home and her phone was switched off.

Priyamvada is welcomed with some questions and concern but she throws off her questions with taunts and goes inside her room. Vikram wonders why his strict father lets her go easily. Vedavati tells him that his love for his sister. However, after Vikram leaves, she too wonders why Vayuputra does not say a single word against her. The next morning, Dharani gives the lunch box to Aditya but he leaves without taking it. So, she asks her friend to book a cab. Aditya finds out that he has to take Dharani and refuses to take it.

They have an unnecessary and illogical argument, in which, Hamsa is made the middleman. Dharani’s friend threatens Aditya to drop her or else she would speak to Aditya’s manager. Fear settles in him, and he agrees to drive her to the boutique.