Dharani saves people on the street from a maniac. Vikram believes it's Sharavani and is about to confess his feelings. Read the full update here. 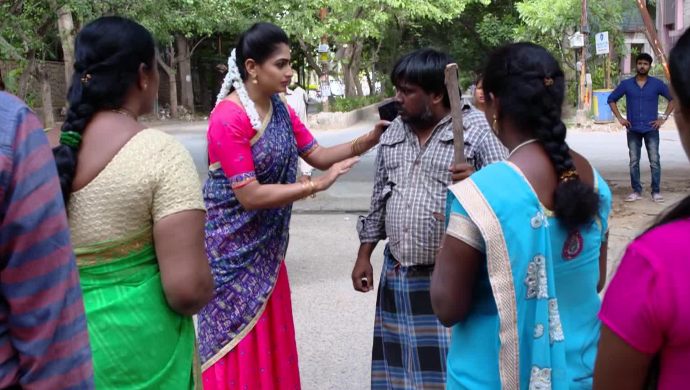 Previously, in the Telugu TV show Attarintlo Akka Chellellu, Shravani finds herself lost in the thoughts of Vikram and his strange behaviour. Dharani tries to strike a conversation with her elder sister, but Shravani asks her to get out. Later at night, Dharani’s mother wants to save her future and do something about it. But Dharani is firm on wanting to get done with whatever comes her way, rather than looking out for something new.

In today’s episode, Chamundeshwari Akka suggests that Dharani join her as one of the cooks for her catering business. Godavari hesitates, but Shravani tells Chamundeshwari that if she is willing to share 75% of the profits, Dharani will join her. Chamundeshwari tells her men to set up a station inside their house. But Dharani stops her and accepts whatever offer she has. Chamundeshwari is relieved and takes Dharani along with her to an event to start cooking for her catering business. Godavari is saddened to see Dharani’s state but Shravani intervenes and says that it’s good for Dharani to get an opportunity to learn something new.

Aditya goes back to Shankarayya’s stall and looks for Dharani. He asks Saiydamma about moving their food cart to another place. Aditya starts hallucinating that Dharani has been talking to him and serving him food, but it has been Saiydamma all along. Saiydamma thinks of all that he said on the day of Dharani’s engagement to Shankarayya and mixes extra chilli powder in Aditya’s dish. The lover boy continues to eat it without flinching. Saiydamma is in shock to see that he has no reaction to the extremely spicy food. She goes back to get the chilli powder packet and pours it all on his plate. But Aditya thinks it’s Dharani’s deed and continues eating.

Vedavati sees Aditya at the stall and internally cringes to see that he has been eating outside food instead of eating good food at home. She thinks it’s best to leave him alone and moves ahead. Two women are passing by the street when they are attacked by a maniac on the roads. Dharani and Vikram see this from opposite sides and come to help. Dharani calls out saying, ‘Raju’ and the maniac puts his weapon down. Vikram is surprised because he believes that’s Shravani. Dharani asks him what was wrong and tells the passerby women to act along. She distracts him and saves them. The women thank them and leave.

Vikram comes clapping towards Dharani and refers to her as Shravani. He asks why she behaved as if she didn’t know him. Dharani tries to cover up, but fails. Luckily, Vikram has no idea that he is opening his heart out to Dharani. He is about to confess his feelings, but Dharani decides to tackle the situation and act like Shravani. Stay tuned to know what happens next.