In the latest episode of Attarintlo Akka Chellellu, Dharani takes care of Aditya and Vagdevi wonders about her intentions. Read the full update here. 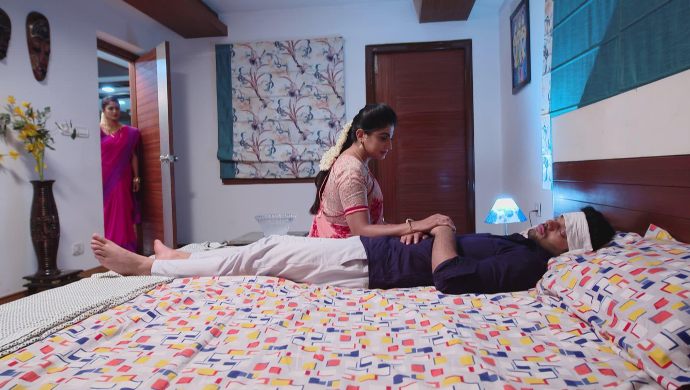 Earlier in Attarintlo Akka Chellellu, on Shobhan Raju’s advice, the lawyer goes and talks to Aditya while also trying to get him drunk. The lawyer tells Aditya all the negative things about Dharani. At home, Dharani scares Priyamvada by lying about Shobhan Raju’s condition and Vikram scolds Priyamvada for talking negatively about Aditya. Aditya comes home drunk and rants about Dharani’s behaviour in front of everyone.

In today’s episode, Aditya asks Dharani to kill him at once, instead of giving him the slow poison. Dharani begs him to stop talking negatively. Priyamvada uses this opportunity and asks Aditya if he plans on kicking his wife out of the house. To everyone’s surprise, Aditya agrees and goes closer to Dharani to drag her out of the house. But Vedavati steps in and stops him from being so harsh. She tells him that he has to either deal with or try to rectify the situation.

Vedavati tells Vikram to take Aditya into his room and put him to sleep. Sometime later, everyone disperses and Dharani goes to her room. She uses a wet cloth to lower Aditya’s rising temperature as he is suffering from high fever. She hears him talk in sleep, where he asks his mother about Dharani’s behaviour. Dharani responds to him as Vedavati and tells him that Aditya does not need to worry because his smile alone can change everything. Vedavati sees this.

She wonders why Dharani’s behaviour hadn’t been summing up well. While she seems to be taking great care of Aditya, Vedavati wonders why she did all the wrong things earlier. The next day, the lawyer meets Shashikala and tells her that he did not find Shobhan Raju, despite searching for him all night long. Shashikala asks if he had seen him earlier and flashes a picture on her phone. The lawyer is shocked to see this and is slapped by Shashikala when he tells her about their meeting.

In a few hours, Shashikala locates Shobhan Raju. Before she could do anything to him, he explains that he is eyeing Vayuputra’s property and that’s the reason he did not come to visit her. Dharani goes to Vedavati and asks her to come along as she wanted to fulfill her prayer in the presence of the entire family. Vedavati agrees, but Priyamvada questions Dharani’s intention and the latter gives her a fitting answer.

Women’s Day Special: 10 Quotes By Powerful Ladies Of All Times That Will…