In the latest episode of Attarintlo Akka Chellellu, Shashikala tells her henchman to call a special gang to kill Vikram and Aditya. Read more here 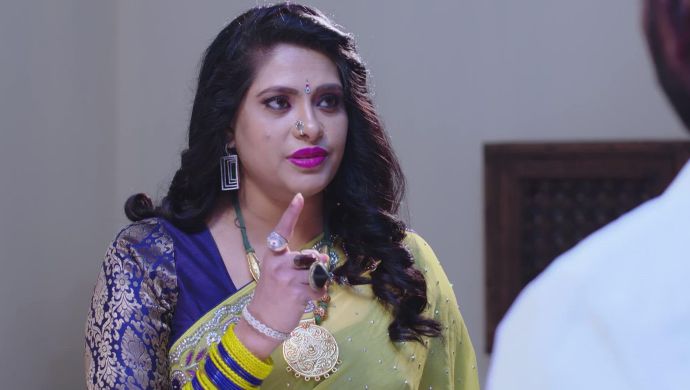 Earlier in Attarintlo Akka Chellellu, Dharani offers to share the glass of juice with her husband. As he drinks his part, she pulls his cheeks and the two start running behind each other, like a cat and mouse. Priyamvada takes the medicine from Shashikala’s henchman and meets Aditya to brainwash him. He promises to protect her. When Vikram asks about his signatures on the company papers, Aditya starts getting tense. Vikram stops and decides to take it easy and ask him about it later. Priyamvada is happy to see this. In the evening, she mixes the liquid medicine into the teertham water and decides to give it to Vikram and Aditya.

In today’s episode, Priyamvada goes out to give aarti to Vikram and Aditya. He takes it, but not before asking the reason she decided to perform a Pooja before bedtime. Priyamvada covers up by saying that there is no time to pray. She then offers teertham to Aditya. And, this does not go down well with him. He tries to explain that he shouldn’t be consuming anything after the tablets. But Priyamvada insists that it wouldn’t do any harm. Aditya gives up and extends his hand. But he sees the ash of incense sticks in teertham and starts arguing again.

When Priyamvada continues to force him, Aditya loses his temper. He stands up and knocks the vessel out of her hands. Aditya rushes into his bedroom, and Priyamvada thinks of how her moves backfired. In the bedroom, Dharani thinks about the reason for Aditya’s behavioural changes. He walks in and sits on the bed. Aditya’s eyes turn red due to anger and he clenches his jaw in frustration. Dharani is taken aback to see him and enquires about what had upset him.

Aditya explains the whole scenario and starts saying that he is going crazy. She holds him close to her and tries to calm him down. She finds something fishy about Priyamvada’s timings. That’s when she realises that the anger isn’t associated with people, but is a side-effect of the tablets. She recounts several episodes of his anger bouts over the last few days and decides to check with the doctor. By this time, Aditya falls asleep and Dharani puts him to bed.

Shashikala calls Priyamvada to check on the developments. When Priyamvada starts narrating her story, Shashikala asks Priyamvada to be her eyes and ears in the house. The lawyer asks her to be thankful because if anything happens to Vikram or Aditya, she will be behind bars. She thinks of ways to beat the family when her henchman suggests that they need to aim at the main pillar, not the side pillars. The lawyer tries to suggest against it, but Shashikala reminds him that his job is to conceal the criminals’ wrongdoings.

Adhirindi Episode 3: Navdeep Continues To Laugh Out Loud At The Madness With…

Shashikala turns to her henchman and asks him to call the Bihar Gang members, and pay them a handsome amount to kill Vikram and Aditya. The next morning, Dharani steps out of the house when she sees two strangers lurking outside the house. She becomes suspicious, but gets distracted by Aditya, who insists on dropping her. She gets in the car. Aditya helps her with the seat-belt and the two share a romantic moment.