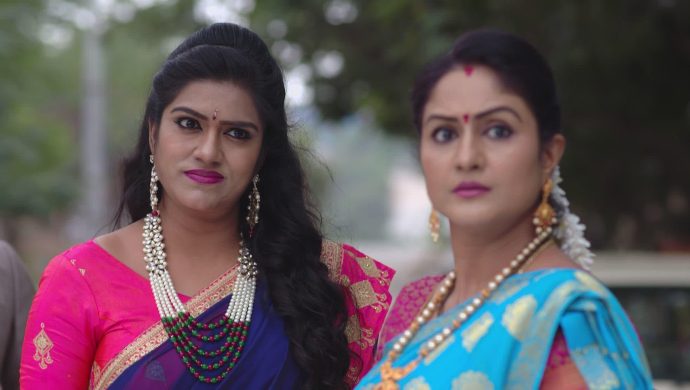 Earlier in Attarintlo Akka Chellellu, Aditya loses his temper on Dharani and asks her to leave the room. He calls Priyamvada to ask for his tablets. When she does not respond properly, he throws the phone on the ground. Priyamvada, impressed by how their plan was panning out, compliments Shobhan Raju for his foresight. Narayana calls Vedavati to thank her and tells him to stay tuned for another surprise. Priyamvada finds out that Vedavati is planning to invite Narayana and Godawari to stay with them. Hamsa keeps worrying about Shivudu’s condition and about the things that she is forced to do to Dharani, when Dharani notices her panic and asks her to relax.

In the latest episode, Dharani asks Vedavati, who is on her way out, about her rangoli. Vedavati compliments it and states that she has a surprise for Shravani and Dharani. Priyamvada spins around words and makes sure that Hamsa goes with Vedavati, since she knows about the surprise. When Vedavati and Hamsa reach Narayana’s house, they do not see anyone around. Priyamvada steps down from her car along with the accountant and explains the situation. Vedavati is shocked to hear that Dharani used the educational funds for her own selfish needs.

At home, Aditya comes into the kitchen and asks Dharani about her reason for not cooperating as his “lover”. Dharani understands that her previous interaction with him has affected him deeply. So, she decides to behave well with Aditya, unless needed otherwise. Dharani tries sweet-talking, but Aditya does not let go of the topic. Aditya concludes that Dharani has been showing off her authority since she got the keys. But Dharani explains that it is a responsibility, not authority. Finally, she tries to go away from the kitchen and Aditya holds her hand.

No 1 Kodalu 4 February 2020 Preview: Sarsu And Chinni Spend The Night In A Temple