In the latest episode of Attarintlo Akka Chellellu, Hamsa meets Godawari and lies to her about a new house given to them. Read the full update here. 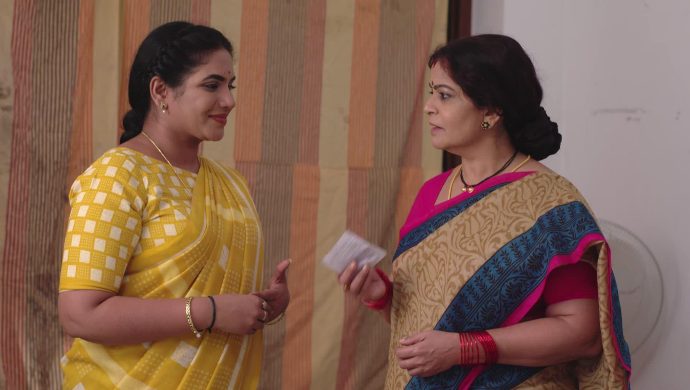 Earlier in Attarintlo Akka Chellellu, Dharani signs the cheque, and the accountant informs Shobhan Raju. Somehow, Shobhan Raju directs the money to Hamsa’s account. He asks Priyamvada to ask Hamsa and Shivudu to live in a new house with that money. This would make Dharani come across as a fraudster. On the other hand, Aditya writes a love letter and asks Priyamvada to deliver it to Dharani. They both act extremely shy and this annoys Priyamvada.

In today’s episode, Shobhan Raju explains to the two women that they need to talk to Hamsa and send her to meet Godawari. Hamsa must tell Godawari that a new house has been built for her and Narayana, by Vedavati. However, neither Shravani nor Dharani must learn about this transition. Shobhan Raju then explains that this would help them in portraying Dharani as a fraudster in front of Vedavati and the family. Priyamvada acts accordingly and bullies Hamsa in doing whatever she says. Scared for her husband’s life, Hamsa fails to resist herself from doing the wrong thing.

Godawari feels happy and shocked at the same time. She tries to enquire about the weird condition, but Hamsa tries to cover it up by saying that Vedavati does not want to bring material between them. When Godawari seems to be accepting Hamsa’s story, Hamsa asks her to swear that she will not talk about the new house to anyone. Aditya sees Priyamavada talking on a call, and goes close to her. She hangs up the phone in a   jiffy and Aditya asks her to kindly bring Dharani’s love letter to him, at the earliest.

Resolution To Reality: 5 Traits Of Your Favourite Stars You Can Practice To…

EXCLUSIVE: 2020 Is All About Web Series, Says Monica Tavanam Of ZEE5 Original…

Priyamvada tries to argue that his ‘lover’ has not given him any letter. However, Aditya does not agree with her. Priyamvada gives up and goes to Dharani asking for the letter. Dharani makes the most of this opportunity and asks Priyamvada to tackle the situation, all on her own. With no courage or patience to deal with Dharani, Priyamvada asks Shashikala for help in writing a love letter. Shashikala mentions that the newly turned roadside Romeo, their lawyer, would be able to help. However, he assumes that Priyamvada is writing a love letter to him and gets scolded by Priyamvada for trying to flirt with her.

Resolution To Reality: 5 Traits Of Your Favourite Stars You Can Practice To Perfection